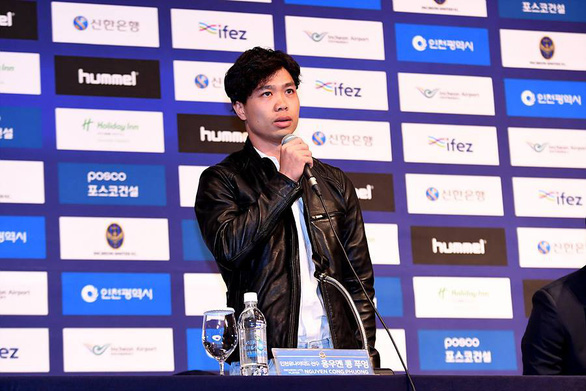 Talented Vietnamese striker Nguyen Cong Phuong was unveiled by K-League 1 side Incheon United FC on Thursday, as the 24-year-old moves to play for the South Korean club on a one-year loan.

The debut ceremony was held in the northwestern South Korean city of Incheon after the Vietnamese footballer completed a health check earlier the same day.

Phuong’s monthly salary at Incheon United is US$10,000, according to Doan Nguyen Duc, who runs multifaceted conglomerate Hoang Anh Gia Lai and a football academy that trained Phuong.

Nguyen Cong Phuong has played for the Vietnam national football team since 2015, when he was only 20 years old.

The talisman played an important role in a string of achievements of Vietnam’s football at the Asian Football Confederation (AFC) U23 Championship in China, the Asian Games in Indonesia, the ASEAN Football Federation (AFF) Cup in 2018, and the 2019 Asian Cup in the UAE last month.

This is the second time he has played for a club outside Vietnam, following a loan spell with Japanese second division side Mito HollyHock in 2016.