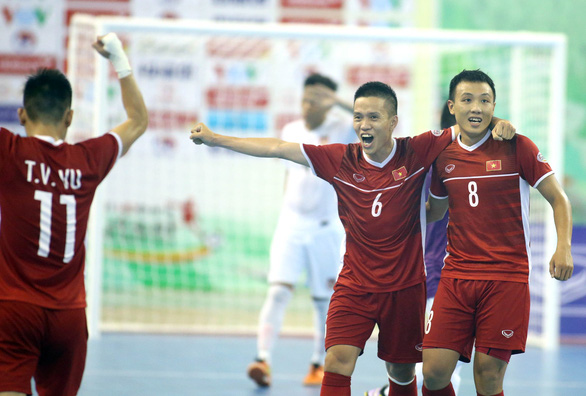 Losing 0-2 to Thailand on Friday in the semifinals of the Southeast Asian championship in Ho Chi Minh City, the Vietnamese would only qualify for the continental tourney when they beat Myanmar in the third-place game.

And it was not an easy match as suggested by the final score.

Myanmar managed to equalize right in the first half even though they went two goals down seven minutes into the game.

Pyae Phyo Maung took the ball from captain Tran Van Vu’s wrong pass and got it to Naing Ye Kyaw, who easily shortened the gap to 1-2 in the ninth minute.

Then Minh Tri and goalie Ho Van Y failed to find connection, leading to Kyaw Soe Moe shooting the ball into the empty net on 16 minutes.

Vietnam could have conceded a third goal in the 15th minute but goalkeeper Y denied Pyae Phyo Maung on the penalty spot.

The Vietnamese made it 3-2 in the 27th minute following a finish by Gia Hung.

Myanmar then had no choice but to resort to the power-play strategy, in which they played with five players without a goalkeeper.

But they only netted one more goal before conceding another three.

Coach Miguel Rodrigo’s men thus secured a berth in the 2020 AFC Futsal Championship, to be hosted by Turkmenistan between February 24 and March 10, 2020, following in the footsteps of Thailand and Indonesia.

On Sunday, the Thai defeated their Indonesian rivals 5-0 in the final showdown of the 2019 AFF Futsal Championship, which took place at Phu Tho Sports House in Ho Chi Minh City from October 21 to 27.