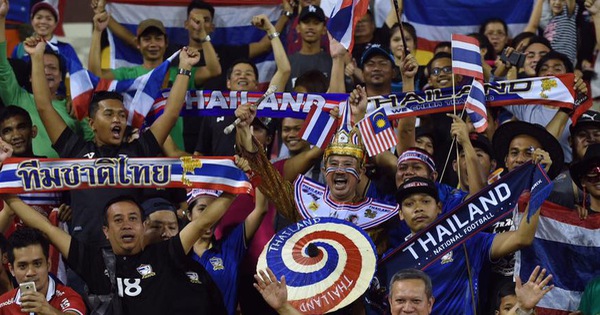 About 1,800 Thai supporters are expected to show up at My Dinh National Stadium in Hanoi to cheer for the Group G match between Vietnam and Thailand in the Asian section of the 2022 FIFA World Cup second qualifying round on Tuesday night.

The Southeast Asian archrivals will challenge each other at the 40,000-seat My Dinh arena in the Vietnamese capital at 8:00 pm.

According to the Vietnam Football Federation (VFF), the Football Association of Thailand has distributed 1,800 tickets for the match to Thai fans.

Meanwhile, the hosts will fill the remaining 38,200 seats.

Those in Hanoi who do not have tickets to enter the stadium can watch the match live on a giant screen installed outside the venue.

The match will also be broadcast live on different channels and cable networks, including VTC1, BDTV, and K+PM, social media platforms, and Tuoi Tre’s online Vietnamese site at thethao.tuoitre.vn

In September, Vietnam and Thailand settled for a goalless draw in their Group G opener near Bangkok.

During the second qualifying round, six first-round winners and 34 teams, ranking 1st to 34th in Asia, are divided into eight groups of five sides to play home-and-away round-robin matches.

Alongside Vietnam and Thailand, Malaysia, Indonesia, and the UAE make Group G.

Tuesday’s match will also be Vietnam’s last game in the Asian section of 2022 FIFA World Cup qualification this year. They will play a rematch with the UAE in June next year.

The clash between the two teams is highly anticipated as Vietnam may be dethroned if they are defeated by the guests.

“A victory will cement [Vietnam’s] place at the summit but should they lose, the visiting Thais can move to the top level with them on points,” FIFA wrote of the match on its official website on Monday.