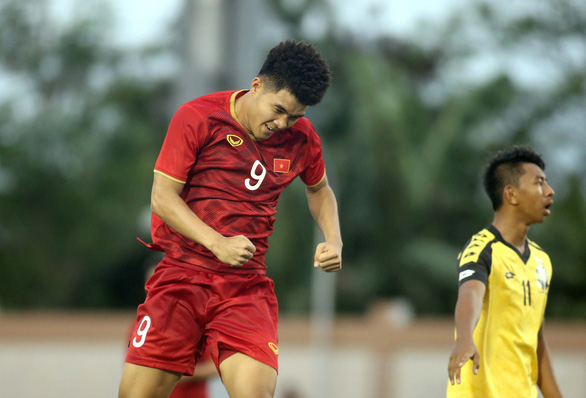 Vietnam started their men’s football campaign at the 2019 Southeast Asian (SEA) Games with a 6-0 triumph over Brunei in the Philippines on Monday afternoon.

The match kicked off at 4:00 pm at Binan Football Stadium in Laguna Province, about 100 kilometers from the Filipino capital of Manila, and ended with an absolute victory for the Vietnamese players.

The Golden Dragons dominated the entire game while Brunei struggled to keep their opponents at bay.

Ha Duc Chinh headed home as early as nine minutes into the first half before he finished a cross from Do Thanh Thinh in the 23rd minute to score his second.

Brunei managed to keep the 2-0 scoreboard for the remainder of the first half.

However, 22-year-old Duc Chinh had his hat-trick just three minutes after the restart as he headed in again from another corner-kick to make it 3-0.

Trieu Viet Hung netted the fourth for Vietnam not much later.

It was Duc Chinh again who took full advantage of another corner-kick to make it 5-0.

Nguyen Trong Hung completed the 6-0 win for Vietnam in the dying minutes.

Experts believed that the Golden Dragons could have scored even more goals as they had a total of ten on-target shots toward Brunei’s woodwork.

During a press meeting after the game, Vietnam’s head coach Park Hang Seo said he was satisfied with the score, but not with his players’ performance.

“We still have many issues and the team need to play better,” Park told the press.

The victory put Vietnam temporarily on top of Group B, which also includes Thailand, Laos, Indonesia, and Singapore, alongside Brunei.

The next games in the group will be played out on Tuesday, when Thailand will play Indonesia and Laos will challenge Singapore.

Vietnam will have two days off before they take on Laos on November 28.

This year’s SEA Games, in its 30th edition, are organized in the Philippines from November 30 to December 11, with athletes competing in 530 events across 56 sports.

Monday was the opening day of men’s football category at the Games, five days ahead of the official schedule.

Participating countries send under-22 players to compete in men’s football, with two overage players allowed on each 20-member team.