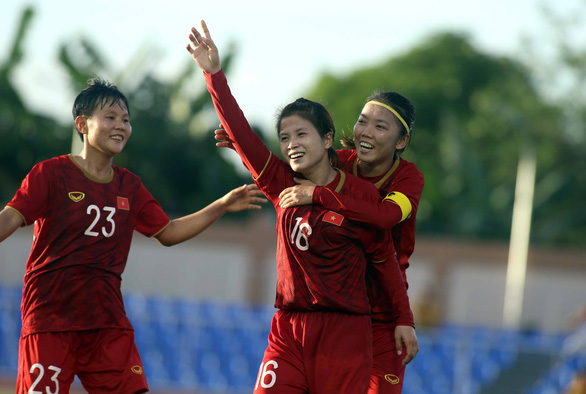 Vietnam and Thailand played out a 1-1 draw in the inaugural match of women’s football at the 2019 Southeast Asian (SEA) Games in the Philippines on Tuesday afternoon.

The 2017 SEA Games gold medalists and silver medalists challenged each other at 4:00 pm at Binan Football Stadium in Laguna Province, about 100 kilometers from the Filipino capital of Manila.

Vietnam went into the game with a counter-attack tactic, putting great pressure on their Southeast Asian archrivals.

Meanwhile, the Thai side wasted a number of set pieces that probably made them regret later when midfielder Duong Thi Van headed home for Vietnam just seconds before half-time.

Vietnam conceded a goal in the 52nd minute after the restart, but it was disallowed as a Thai defender was ruled offside.

Thailand managed to find their equalizer with a header by striker Taneekarn Dangda in the 87th minute.

No more goals were scored as only three minutes remained before the referee blew the final whistle.

Vietnam and Thailand, alongside Indonesia, are in Group B of the women’s football category at the 2019 SEA Games.

The two teams had finished level on ten points after the round robin matches in the 2017 SEA Games hosted by Malaysia, but it was Vietnam that claimed the tournament’s champion title thanks to a better goal difference.

The Golden Girls will take on Indonesia in their second group game on Friday.

This year’s SEA Games, in its 30th edition, are organized in the Philippines from November 30 to December 11, with athletes competing in 530 events across 56 sports.

Tuesday was the opening day of women’s football category at the Games, four days ahead of the official schedule.