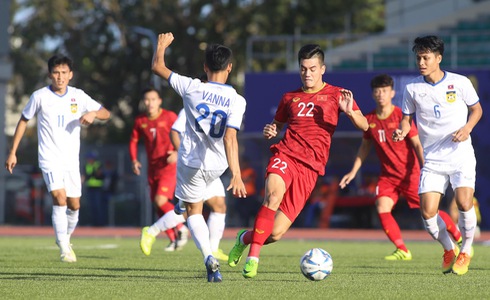 Vietnam’s men’s football squad demolished Laos 6-1 in their second match at the 2019 Southeast Asian (SEA) Games in the Philippines on Thursday afternoon.

Tien Linh started the game off strong when he found the Laotian net just three minutes after the match kicked off at 4:00 pm at Binan Football Stadium in Laguna Province, about 100 kilometers from the Filipino capital of Manila.

Tien Linh doubled the lead in the 17th minute with an assist from Tan Tai.

Laos conceded two more goals in the second half when Hung Dung and Tien Linh each found the back of the net in the 53rd and 57th minutes, respectively.

It was not until the 60th minute that Laos finally put themselves on the scoreboard when Kaharan Phetsivilay headed a free kick into Vietnam’s net.

Trong Hoang and Quang Hai closed out the match with one more goal each in the remainder of the second half.

The victory over Laos is Vietnam’s second this week, following their 6-0 win over Brunei on Monday.

Vietnam currently sit atop the tournament’s Group B with six points after two games while Laos are in fifth with only one point.

On Sunday, the Golden Dragons will face Indonesia.

While Indonesia have also chalked up six points in the tournament, they sit in second due to a seven-goal difference between them and Vietnam.

The first edition of the event was held in 1959.

It has since grown to be one of the region’s largest sporting events, hosting athletes from the 11 countries that make up Southeast Asia.

This year’s SEA Games, the event’s 30th installment, will be held in the Philippines from November 30 to December 11, with athletes competing in 530 events across 56 sports.

The men’s football category kicked off on Monday, five days ahead of the Games’ official start .

Participating countries sent their under-22 players to compete in the tournament, with two overage footballers allowed on each 20-member team.