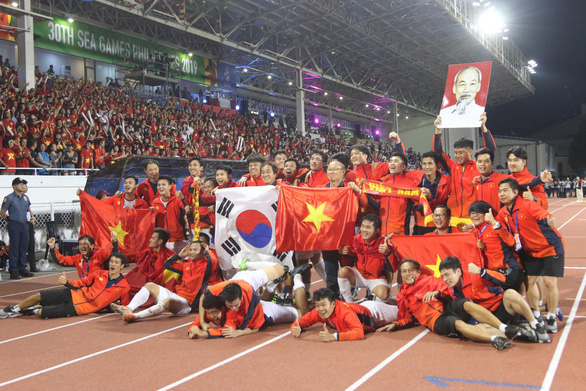 SC Heerenveen's defender Doan Van Hau scored a brace in Vietnam's 3-0 thrashing of Indonesia to win a historic gold medal in men's football at the 2019 Southeast Asian (SEA) Games in the Philippines on Tuesday.

This is Vietnamese football's first-ever gold medal in the category in 60 years.

Park's men lost no game at this football tournament, having beaten Brunei 6-0 on November 25, Laos 6-1 on November 28, Indonesia 2-1 on December 1, Singapore 1-0 on December 3, and drawn 2-2 against Thailand on December 5, all in the group stage, before routing Cambodia 4-0 in the semifinals on December 7.

Vietnam dominated the rematch against Indonesia, neutralizing most of their opponents' attacks prior to punishing them with sharp finishes.

Vietnam's Nguyen Trong Hoang crossed the ball from the right on 16 minutes for Ha Duc Chinh's slick shot, but it went narrowly wide.

However, the junior Golden Dragons eventually opened the scoring given their smooth play and well-organized formation.

Doan Van Hau, who plays for SC Heerenveen in the Netherlands' top-flight league and seemed to be ubiquitous in the final showdown, headed home a Do Hung Dung set piece from the left in the 39th minute.

Indra Sjafri’s men staged many attacks right after the break while the Vietnamese kept calm, waiting for dangerous counterattacks.

And they managed to net the second goal in the 59th minute.

Nguyen Duc Chien’s cross from the right flank found striker Nguyen Tien Linh, who touched the ball with his thigh before skipper Do Hung Dung stormed in to clinically fire past Indonesian goalkeeper Nadeo Winata from just outside the box.

Vietnam hammered the final nail in the coffin of Indonesia 73 minutes into the game, when Nguyen Hoang Duc’s free kick was blocked out by Winata but Doan Van Hau swiftly kicked the ball in.

Park was given a red card four minutes later because of his ire along the pitch.