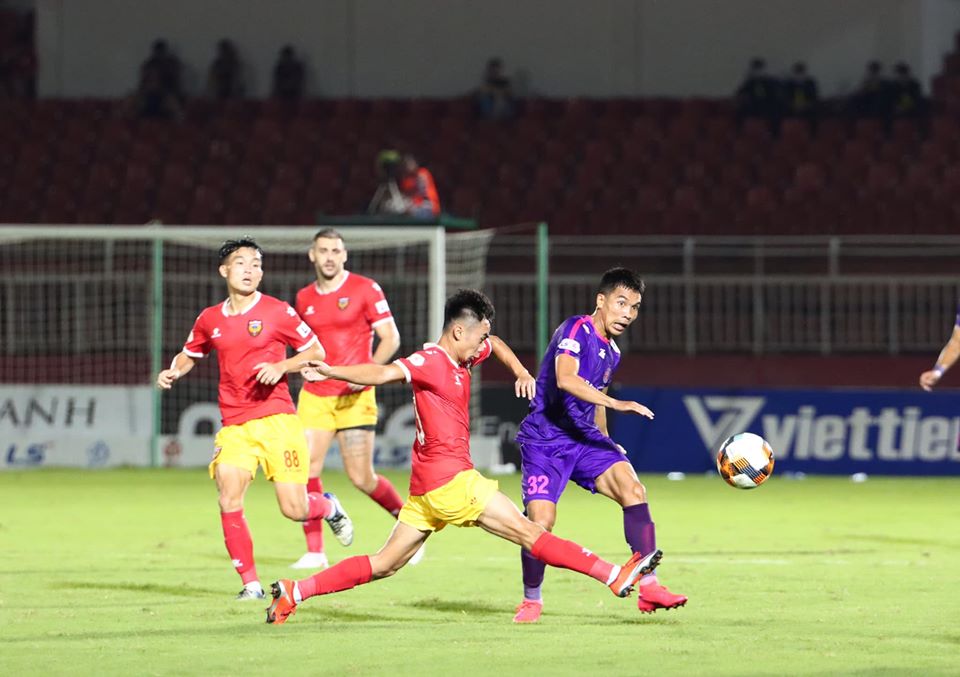 Saigon FC and Hong Linh Ha Tinh FC fought to a 1-1 draw in a rainy match in the sixth round of Vietnam’s top-flight professional football tournament V-League 1 in Ho Chi Minh City on Wednesday evening.

Brazilian Geovane Magno made an impact to help Saigon FC take back one point at Thong Nhat Stadium.

The match started at a slow pace but in abundance of atmosphere created by a crowd of the away side’s supporters that outshined the hosts’.

The first half went goalless for both teams despite their several attempts with Hong Linh Ha Tinh FC taking more control.

Brazil’s Bruno Henrique sparked the game into life for the visitors, putting them in the lead after converting a penalty kick in the 64th minute.

Heavy rain that started in the first half did not stop Saigon FC from giving a much better performance in the latter part of the second half, particularly with the contribution of Geovane Magno.

The Brazilian midfielder scored a goal for the hosts after a precise shot from inside the penalty area in the 80th minute.

Both sets of players netted no more goals in the remaining ten minutes.

Saigon FC and Hong Linh Ha Tinh FC fell one place to the fifth and 12th positions in the table, respectively, following the draw.

The V-League 1 is the top professional football league in Vietnam, and it is controlled by the Vietnam Professional Football Joint Stock Company.

It is contested by 14 clubs who play one another on a home and away basis.

The team finishing at the top at the end of the season are crowned champions and will qualify for the Asian Football Confederation (AFC) Champions League group stage.

Saigon FC were founded in 2011 as a team based in Hanoi and relocated to Ho Chi Minh City in 2016.

The club have never won the V-League 1 title.

Founded in 2015, Hong Linh Ha Tinh FC is based in the north-central province of Ha Tinh.

It was promoted to the 2020 V-League 1 season after winning the second-tier V-League 2 two rounds early in 2019.

The 2020 season of the top-tier tournament was postponed from March 15 after its first two rounds had been played behind closed doors to prevent the spread of novel coronavirus disease (COVID-19) outbreaks.

It was only restarted on June 5 and immediately drew thousands of fans into stadiums owing to the Southeast Asian country’s success in combating the contagion of the novel coronavirus.

The fleet is distributed throughout all districts and at major hospitals