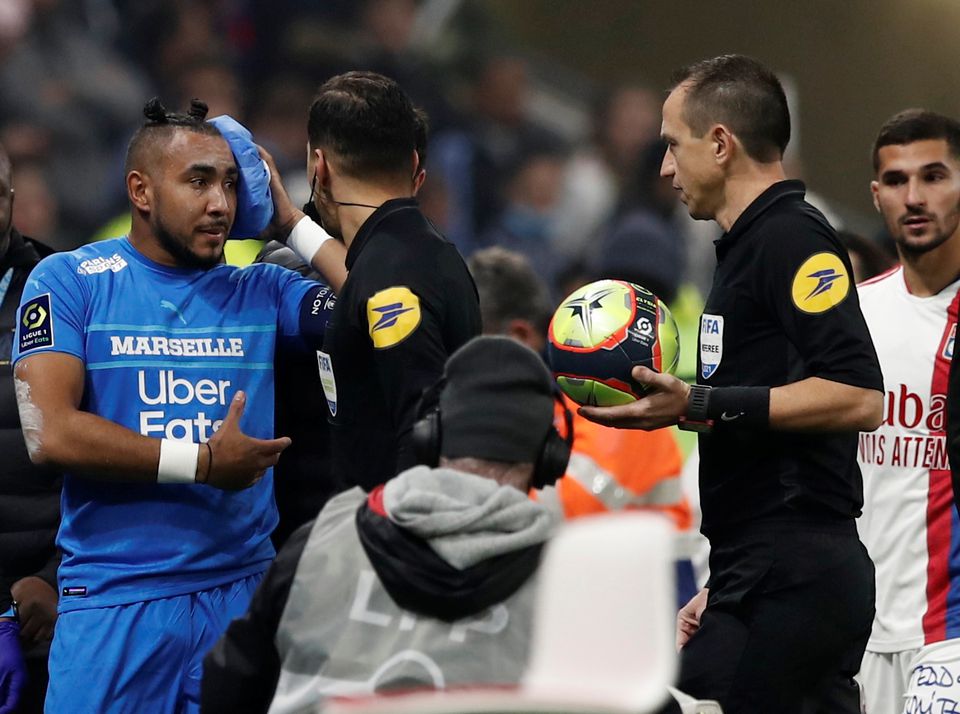 LYON, France -- The Ligue 1 game between Olympique Lyonnais and Olympique de Marseille was abandoned after Marseille's Dimitri Payet was hit by a bottle hurled from the stands at the Groupama Stadium on Sunday, throwing France's Ligue 1 into fresh turmoil.

Payet fell to the ground as he was getting ready to take a corner kick after five minutes, and both teams were sent to the dressing room by referee Ruddy Buquet, who then decided to abandon the match after a suspension of almost two hours.

Payet, who according to the French League (LFP) was also subject to "discriminatory insults", left the pitch with an ice pack on his head.

The stadium's announcer had initially said that the game would restart, following a decision made by local Lyon authorities.

This was immediately criticised by the LFP in a statement, in which the body also said it was summoning an emergency meeting of its disciplinary commission on Monday.

In chaotic scenes, Lyon players took to the pitch to warm up, but Jorge Sampaoli's Marseille stayed in the dressing room and the match was eventually called off.

"The referee believes safety conditions are not met," the stadium announcer said.

"The referee first said that the game could restart and he changed his mind after the violent reaction of Marseille, notably that of their coach," Aulas said.

"I believe the conditions were met to resume the game after the individual had been arrested. He is in police custody."

His Marseille counterpart Pablo Longoria said Payet was "psychologically affected" by the incident and explained that the club had asked Buquet to check on their players before potentially resuming the game.

"We asked him to check on our players' psychological state. He did not wish to go and see the players."

The referee said that his "sporting decision" was to not restart the game, but there were other elements to take into account. "It's a full stadium, players to evacuate," he said.

"My decision was to call off the game. We have to take our responsibilities and that's what I did tonight."

Ligue 1 has been marred by crowd trouble this season.

Nice were docked two points, one of them suspended, after serious incidents during their game against Marseille, whose players clashed with home fans who pelted them with missiles and stormed onto the pitch in August.

The northern derby between RC Lens and Lille was also hit by crowd problems in September, with the start of the second half being delayed by about half a hour after rival fans threw objects at each other before people ran on to the pitch, prompting riot police and stewards to intervene.

There has also been crowd trouble in Montpellier, Angers, Marseille and St Etienne.

"We now have to sit down all together and discuss so that these incidents do not happen again," said Longoria.