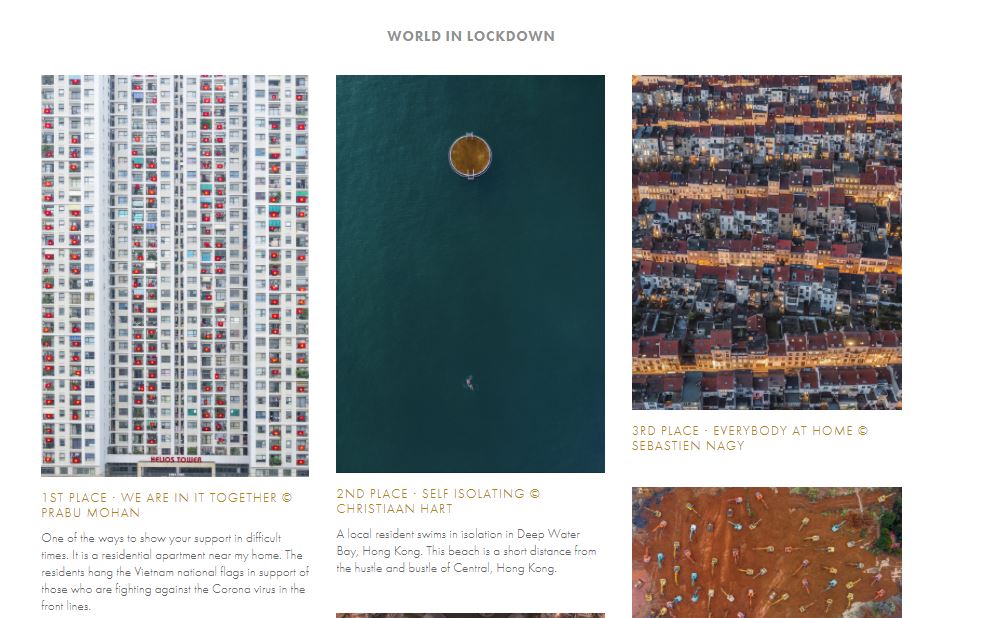 A photo showing Vietnam’s national pride and solidarity during the battle against the COVID-19 pandemic taken by an Indian lecturer living in Hanoi has recently won top prizes at two photography contests.

The photo by Prabu Mohan capturing a building in Hanoi festooned with national flags, a sign of solidarity when Vietnam was combating the pandemic in April, claimed the A award at a photo contest held by the Ministry of Health to celebrate country's impression during the pandemic.

According to the ministry’s website, the contest was aimed at reflecting pandemic developments as well as the efforts of the people and authorities at all levels to fight against the virus.

It also looked for photos depicting Vietnamese people’s determination to overcome the pandemic.

Within two months of launching, the contest received 1,300 entries from 136 photographers who were Vietnamese living in Vietnam and abroad as well as foreigners.

Earlier, Mohan's photo also won the first prize in the ‘World in Lockdown’ subject of the Editorial category at the 2020 Aerial Photography Awards.

“One of the ways to show your support in difficult times,” the Indian man captioned the photo now entitled 'We Are In It Together’ on the 2020 Aerial Photography Awards’ website.

“It is an apartment building near my home,” he added.

“The residents hang the Vietnam national flags in support of those who are fighting against the novel coronavirus in the front lines.”

Talking with Tuoi Tre News on Sunday, Mohan expressed his appreciation toward the awards he had received.

“I’m very happy to hear about both awards in the very same week,” he recalled.

“Also, I’m really glad that I was able to share the picture about Vietnam’s fight against [the novel] coronavirus to a bigger audience by participating in and winning the aerial photo contest under the ‘World in Lockdown’ category."

In April, Mohan took the photo, cropped it a bit, and posted it on a Facebook group whose thousands of members were expats and locals living in the capital city of Vietnam.

His post had since been flooded with positive comments from the members before it was shared all over social networks by both expats and Vietnamese netizens.

Mohan also recalled the scene on his Instagram handle @the_prabster.

“It’s an apartment building near my place with the Vietnam flags to show that we are all in it together to win the fight against COVID-19,” he wrote in the description of the Instagram post.

He went on to explain to his followers, “It’s been always like this in Vietnam, whether the country wins a football [game] or [deals with a] difficult time like this.”

Mohan said he is a senior lecturer of mathematics at British University Vietnam, and photography is his hobby.