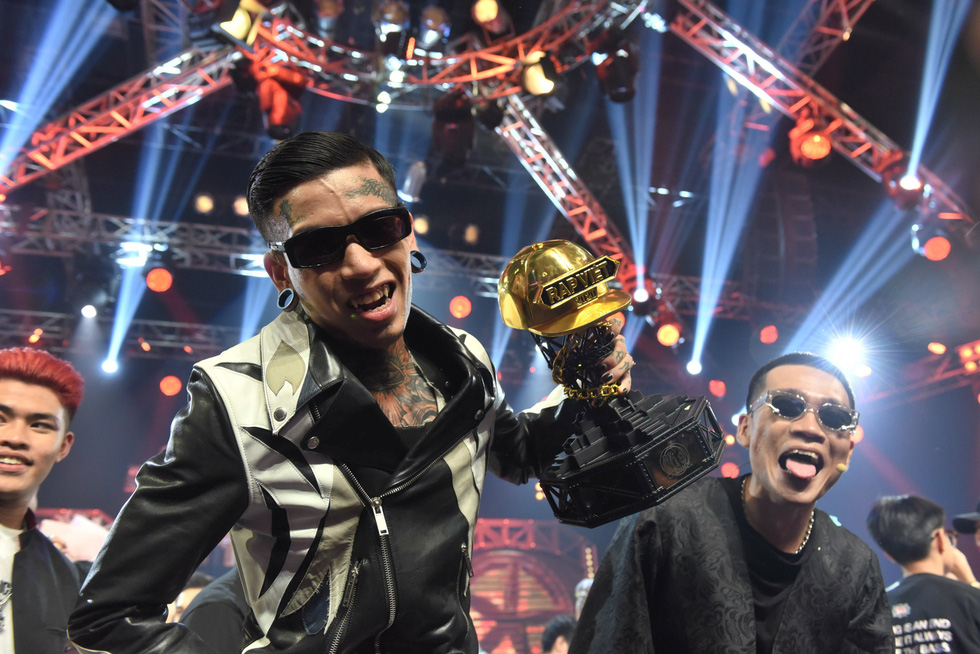 After two decades of development in Vietnam, rap music has seen some achievements with one of the significant years being 2020, where rapping contests drew huge attention from mass audiences.

Ten years of foundations and struggles

Before 2002, rap was still something foreign in Vietnam until a group named Da Rap Club was formed in Hanoi.

The club operated as a place to exchange and provide information about rap in the world, leading to the first underground rappers showing up in Vietnam.

During the first three years, the club brought its name and rap knowledge to many young people in both northern and southern Vietnam.

Next, the period of 2006 to 2008 was considered a blooming time for rap and hip-hop culture in Vietnam as youngsters started to group together and rap battles became more popular in the local underground world.

While a few rappers were successful enough to play shows to large audiences and to be known by mass audiences such as LK and Tien Dat, the majority of the communities still decided to stay underground where they were freer to live the genre of music they loved.

“The biggest challenge for our generation was finding information to approach this kind of culture directly and properly,” Ha Le, who is considered one of the pioneers in hip-hop culture in Vietnam, told Tuoi Tre (Youth) Newspaper.

“This limited the development of hip-hop culture in Vietnam and made the genre somehow a taboo in the country at the time,” he added.

“Previously, it was very hard to organize a rap show,” Wowy, one of the four coaches from the 2020 hit show Rap Viet, expressed.

“In Vietnam, rappers often perform at nightclubs and some certain events and they are not recognized, while in some other countries, rappers perform at big music festivals,” he commented.

From 2008 to 2010, rap music in Vietnam became more varied in song topics beyond the most popular topic of love, however, the local rapping industry did not have a proper focus on producing and mixing music.

Most of the rap songs were recorded on available beats on the Internet while rappers only worked for passion and could not make money for their job.

In 2010, Hanoi rappers JustaTee and LK formed the rapping group Lady Killah with the aim of bringing R&B music closer to the local youth community.

They have collaborated with other genres to offer more open music products.

Karik has become more and more known as his rap songs, or songs collaborating with mainstream singers, became hits on the local market.

The transformation made by Lady Killah, Spacespeakers and Karik has played a role in the emerging popularity of rap in Vietnam among mass audiences currently.

However, rapper Karik admitted the everlasting existence of an ‘invisible’ line between underground and mainstream rap.

“That line will never be erased whether rap prevails in the Vietnamese music industry,” Karik commented.

“Years after years, young people will come to rap with different starting points and perspectives, so it’s inevitable for the existence of an ‘invisible’ line between underground and mainstream,” he added.

The past decade has seen a strong evolution of rap music in Vietnam, with a variety of topics chosen for their lyrics.

Rap has also seen a development in its collaboration with other genres including opera, cai luong, a form of folk opera popular in southern Vietnam, and music by Trinh Cong Son, a prominent figure in Vietnam’s music firmament in the last decades of the 20th century.

In August 2020, the rap scene in Vietnam was shaken by the two contests: Rap Viet in Ho Chi Minh City and King of Rap in Hanoi.

On the first day it was released, Rap Viet reached six million views and hit the Top 1 Trending on YouTube while King of Rap ranked fourth with two million views.

While Rap Viet attracted audiences with its famous coaches including Suboi, Binz, Karik, and Wowy as well as judges JustaTee and Rymastic, King of Rap were favored by the rapping community thanks to its jury including big names such as Lil'Shady, LK, BigDaddy and Dat Maniac.

In addition, many believed that Rap Viet’s host Tran Thanh, a famed comedian, had also contributed as a bridge to bring rap music to his mass audiences.

Within the frame of the contests, contestants received the support from famous producers who helped amplify their rapping talent to create applauded performances.

Many performances from Rap Viet hit YouTube with millions of views.

Karik, one of the coaches at Rap Viet, commented on opinions saying it would not be easy for the contestants to step out and work in their industry on their own, “This may be true but not completely correct.”

“Some already have the music style which is suitable to the current market, so the point is if they can find ways to promote their other ability to go for a long way,” he believed.

“To the few remaining (rappers), I think they have to try a lot to exist and be favored (in this industry).

“But whoever they are, they have to be truly clever and determined to have a stable position in the Vietnamese music market which is very competitive.”

According to Karik, adaption is the prerequisite in this journey because music will change through time.

“Having enough subtlety and patience, you will go far in this era,” he said.

“Moreover, some other things I consider important are professional ethics as well as the respect to audiences, fellow artists and the job itself,” he concluded.