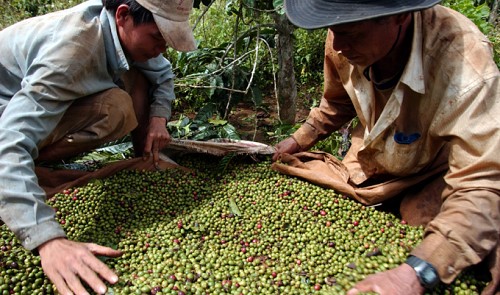 Many coffee exporters in the Central Highlands and neighboring localities said they may cease operations in the upcoming crop year if the issue of value-added tax fraud remains unresolved.

Coffee businesses voiced their complaints at a Tuesday conference held by the Vietnam Cacao and Coffee Association (Vicofa) in Ho Chi Minh City to discuss solutions intended to help exports.

Most attendees said a tough year awaits them, with the domestic coffee price dropping to the lowest rate in the last three years, VND36,000 per kg.

The trick, Ban said, is dishonest businesses asking to buy coffee from farmers at higher than market rates, then selling to exporters at lower prices. They are willing to sell at a loss because the profits they rake in later by embezzling the VAT refunds of the exporters are much higher, he said.

As per current law, coffee exporters have to pay a 5 percent VAT tax when buying from intermediary businesses before shipping the products overseas. They receive the VAT refund when the export process is finished.

But the dishonest middlemen businesses defaulted on the VAT, instead of paying to local tax agencies, leaving the exporters unable to get their refund.

“Normal businesses cannot compete with these dishonest rivals. If we buy at higher prices than they do, we will incur losses,” Ban said.

Most of the exporters said the phenomenon has “gone beyond their tolerance”.

Vu Van Hai, director of Ho Chi Minh City-based Haprosimex Co, said his company has exported nothing since the beginning of this year.

“The VAT frauds have destroyed the coffee business environment, with honest firms suffering risks,” Hai said, adding that he ceased operations not due to a lack of money, but because “we don’t want to continue with such a marred business environment.”

Meanwhile, Nguyen Thi Ngoc Mai, CEO of the Packsimex Co, said she has laid off half of the company’s workforce because “there is nothing for them to do.”

Experts at the conference also warned that Vietnamese exporters are losing their share on the global market.

While the country used to export some 120,000 tons of coffee per month, shipments have dropped to 90,000 tons per month.

“Should the problem remain unsolved, it will create condition for other exporters like Indonesia and Brazil to take over our market shares,” warned Nguyen Quang Binh, director of Chanh Tinh Anh Co.

While exporting prices have fallen to a record low, Vietnamese businesses have also been hit by rumors from the international market that they are all on the verge of bankruptcy.

“Information has spread among international banks and businesses that Vietnamese coffee exporters are going to be killed by VAT frauds and high lending interest rates,” said Vicofa deputy chairman Do Ha Nam.