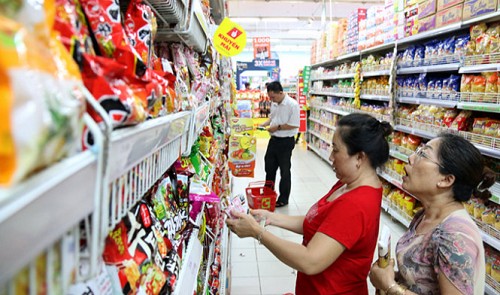 Instant noodles have become fertile ground for small traders and producers alike in Vietnam, where nearly 4 billion packages of the product were consumed last year.

Thu Hong, who runs a grocery store at Rach Ong market in Ho Chi Minh City’s District 8, said she cannot even remember how many types of instant noodle are available at her store.

While the profit earned from each package of instant noodle is modest, vendors say their large sale volume make up for the small profit margin.

Do Van Truc, a trader from Hoc Mon District, said he only earns VND3,000 in profit from selling a 24-package carton of  Hao Hao instant noodle, produced by Acecook Vietnam JSC, which he sources at VND92,000 (US$4.33) per box.

The profit is a mere VND125 per package, he said.

However, Truc can sell as many as 12 boxes of Hao Hao instant noodles, or up to 50 packages of Omachi products, a day.

“So I earn at least VND1.23 million ($58) only from selling two types of instant noodle a month,” Truc said. “The earnings are far higher than from selling milk products.”

Supermarket representatives said instant noodles have some of the most stable sales of any commodity.

The instant noodle market is so appealing that many businesses have jumped in to join production.

A salesperson of an instant noodle company, who wished not to be named, said producing instant noodles requires simple technology and inexpensive machinery.

“You can set up a medium-scale instant noodle production plant with less than VND20 billion ($941,354),” he revealed.

Instant noodles are the biggest commodity in the basket of FMCG goods of Vietnamese consumers, according to market research firm Kantar Worldpanel.

FMCG, or fast-moving consumer goods, are products that are sold quickly and at relatively low cost.

The cities include Ho Chi Minh City and Can Tho in the south, Hanoi in the north, and Da Nang in the central region.

Each household in these cities consumed a package of instant noodles every two days, according to the report.

In rural areas, instant noodle consumption was far higher: 3.4 billion packages during the 12-month period ending in June 2014. Each rural household consumed four packages of instant noodles a week, according to the report.

“But they only focus on the low segment, which accounts for 80 percent of the market share.”