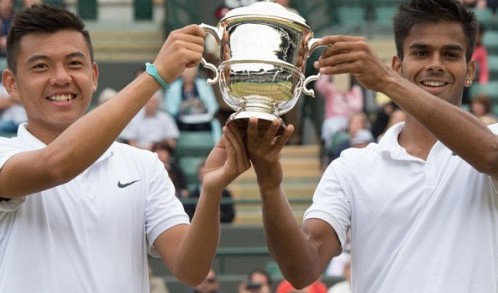 Vietnamese tennis player Ly Hoang Nam will be on the proposed list for special investment from the government after he won the championship title of the 2015 Wimbledon boys’ doubles event over the weekend.

This was confirmed by Nguyen Quoc Ky, general secretary and deputy chairman of the Vietnam Tennis Federation, who said he was impressed by Nam’s achievement.

“In the short term, Nam will be awarded two wild cards, one for a junior singles event and the other for a junior doubles event, to take part in the professional Vietnam Open, which belongs to the Challenge system of the Association of Tennis Professionals [ATP], to be held in October,” Ky added.

Nam, 18, paired with Sumit Nagal of India to compete in the boys’ doubles at the Wimbledon championships in London.

This is the first time a Vietnamese has claimed a junior Grand Slam.

Winning the title gave Nam a ‘ticket’ to take part in the Champions’ Dinner with other stars such as Serena Williams and Novak Djokovic.

“I will never forget this event,” said Nam after his name was announced at the party amid applause from other stars.

Today, Nam will return to Vietnam to prepare for another challenge in the junior group of the U.S. Open in September.