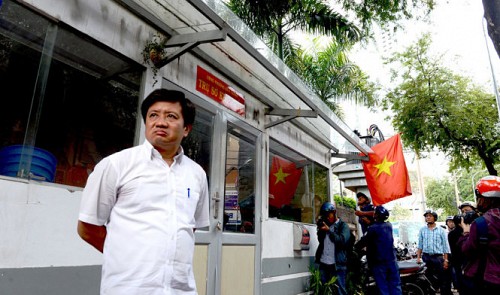 During a meeting organized on Wednesday afternoon to review the results of previous sidewalk clearing efforts, Chairman of the District 1 People’s Committee Tran The Thuan stated that two teams would be in charge of continuing the campaign.

The first group will be led by Chairman Thuan and Deputy Chairman Hai, while the second team will be managed by other district leaders.

The patrols will focus on areas with a continued history of illegal occupancy.

Between January 16 and April 14, local authorities inspected the neighborhood 46 times, making reports for 203 cars and 245 motorbikes and removing 812 objects that encroached on promenades, Thuan said.

The People’s Committees in 10 wards of the district have also issued fines worth a combined VND3.2 billion (US$140,992), the official continued.

Local residents have shown support for the effort by removing over 3,400 objects and keeping business operations from occupying the footpaths.

Several street vendors have been aided in relocating to legitimate venues or switching to other professions.

Positive results have been recorded on 116 out of 134 streets in the district, accounting for 86 percent, Thuan stated.

The two groups of officers led by district leaders are expected to deal with the repeated violations, he said.

A separate team will carry out sudden inspection during the night and on weekends along busy streets.

The efforts began on January 16 when Deputy Chairman Hai led a team of district officials and police officers to fine those who occupied the sidewalks on multiple streets in the downtown area.

In mid-May, Hai stated he had been forced to put the campaign on hold due to orders from the district.