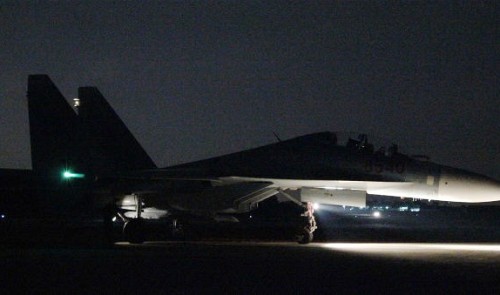 Tuoi Tre (Youth) newspaper reporters were blessed with the exhilarating experience in early October 2015. The drill, part of the first night session of the month, was scheduled to kick off at 6:00 pm at the 935 Fighter Jet Regiment.

At 4:00 pm that day, pilots gathered in the base’s canteen for dinner before departure, two to three hours earlier than usual.

Apart from dinner, the pilots were also served a light meal during their night shift.

At 5:41 pm, around a dozen Su-30MK2 jets, whose strength is likened to that of the king cobra in the animal kingdom, lined up for their mission.

At 6:00 pm sharp, the first aircraft received its final check.

Three minutes later, after receiving the take-off command, the warplane gathered momentum and whooshed into the starless night sky.

That night, the pilots were to carry out a land attack operation.

The jets were invisible against the pitch-black sky, but their roars were still heard and varied, dependant on their heights and complicated flying maneuvers, such as aerial acrobatics, nosediving and flying in a twisting line.

Ground staff had begun preparation for the night-time drill since midday.

At 4:40 pm, the pilots and ground staff gathered at the briefing hall, where boards featuring the most common of over 100 airborne emergencies are displayed.

“Pilots are expected to learn these urgent situations by heart and keep their composure when obstacles come their way. Boards are hung here so that pilots can see such integral knowledge any time,” Colonel Nguyen Van Hoi, in charge of political education, explained.

According to a meteorological assistant’s report, a thunderstorm was forecast for that night, which posed a risk to the night flight.

Right after leaving the briefing hall, Colonel Tran Van Dung, the regiment’s chief, and the shift’s main commander that night, moved briskly to the control tower.

At 6:40 pm, the first jet was ready for landing, successfully completing its task.

Another ‘King Cobra’ was in position at the hangar and soared into the night sky only two minutes after the first one’s landing.

While fuel was pumped into the ‘cobra’ that had just returned to its ‘lair,’ a staffer from the objective testing and analysis department quickly inserted a device into its neck.

The insertion was to retrieve the jet’s black box, which was immediately transferred to the department.

Data fed into the computer would reveal the pilot’s performance and the plane’s technical condition, according to Senior Lieutenant Pham Ha Quang.

Night flights are among the 935 Fighter Jet Regiment’s vital tasks.

The regiment is also the Air Force-Air Defense of Vietnam’s first unit to be entrusted with the duty.

“Night flying is considerably more demanding than any daytime routine because of stress-causing elements including darkness, cloudiness and poor vision, which can make or break pilots’ performance,” Col. Tinh said.

“It’s also harder to retain control during nocturnal flights, during which pilots are prone to illusions,” he noted.

The strenuous task is thus exclusive to only the best pilots, who usually have at least 400 flying hours and have carried out 70, 80 or even 100 daytime flights, Col. Tinh added.

These activities were part of a two-day military event organized by the Air Force-Air Defense of Vietnam in late March 2015.

This was also the first time in 30 years that the Su-30MK2 jets had joined a night bomb-dropping drill.

The outstanding completion of tactical and technical tasks achieved by the 935 Fighter Jet Regiment’s Su-30MK2 pilots was indicative of the crew’s air supremacy and flawless manipulation of the multi-purpose, cutting-edge “King Cobra” jets.

On the October night flight, the last warplane landed safely at 9:10 pm.

“A night routine usually closes at 9:30 pm or a little past 10:00 pm. Otherwise, the deafening, lengthened noise would take a toll on residents in surrounding areas,” Colonel, pilot Tran Quoc Toan said.

“I really love the romantic feeling that I take off at dusk and land against the cloak of darkness, while the whole city has lit up. On good days, the night views are even more gorgeous than those by day,” Colonel Huynh Manh Thang, the regiment’s deputy chief in charge of military training, shared.