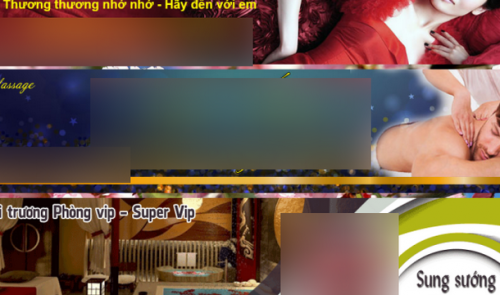 Their illegal operation is not a new issue in the southern Vietnamese city, with a handful of facilities busted every year.

A boom is these types of businesses has been recorded again in recent months, with their services even marketed in public places like local diners, coffee shops and bars.

In several city districts during the evening, people can be approached by young men who lay pieces of paper on their table before leaving without saying a word.

Diners will invariably blush after seeing at the content of these flyers, decorated with alluring images and attractive claims.

The parlors offer a wide range of services, from general rub-downs to VIP, Thai, or Hong Kong massages.

They never forget to add a little spice to their ads, including words like “young and beautiful staff” or “as good as your lover,” to attract customers.

Service charges with tips included are also listed on their flyers and business cards.

The parlors have their team of ‘marketers’ hand out their promotion material at traffic intersections during the day. This activity is more common in outlying neighborhood like District 12, Tan Phu and Binh Tan Districts.

They also market their services online to reach as large an audience as possible, employing suggestive and obscene slogans.

“Relax with me – reach your climax,” “Single? Leave it to me,” and “Become a real man with this massage service” are examples of the slogans used.

Hard to deal with

According to Le Van Quy, deputy head of the city’s Department of Social Evils Prevention, illicit massage parlors have recently resurfaced despite the previous actions of authorities.

Officers carried out inspections in 136 parlors in 2016, 80 percent of which were found to be offering illegal services, Quy continued.

Of concern is that these violations only attract an administrative punishment, regarded as a ‘piece of cake’ relative to the lucrative rewards of offering the services.

The official also attributed the rising problem to the simple registration process for a massage salon business licenses.

Hua Thi Hong Dang, chairwoman of the People’s Committee in Tan Phu District, said that the authority to grant a business permit belonged to the municipal Department of Planning and Investment.

Local units have carried out regular inspections and discovered multiple violations in these facilities, Dang said, adding that the cases had to be transferred to municipal-level agencies as the local administration is not authorized to impose any penalty.

​​Number of international tourists in Vietnam increases in early 2018

The rise bodes well for this year’s tourist sector