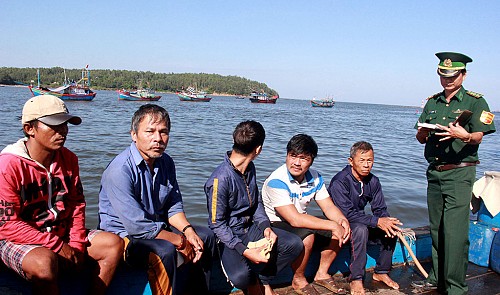 Vietnam has expressed opposition to a recent incident in which Chinese vessels attacked and sunk a Vietnamese fishing boat in Vietnamese waters, demanding clarification and compensation for the damage.

Speaking with Tuoi Tre (Youth) newspaper, Ministry of Foreign Affairs Spokesperson Le Hai Binh stated that Vietnamese representatives met with their counterparts at the Chinese Embassy in Hanoi to address the situation.

Two Vietnamese fishing boats, one captained by Huynh Van Khanh and the other by Vo Van Luu, were pursued by two Chinese ships and two speedboats during a fishing trip near the Hoang Sa (Paracel) archipelago on Saturday last week, resulting in Luu’s boat being sunk.

Five crew members aboard the sunken ship were eventually rescued by Khanh after his smaller boat was able to escape the attackers.

“Vietnam demands that China provide urgent clarification on the case and sanction the two vessels responsible for the assault that threatened the lives of Vietnamese fishermen,” Spokesperson Binh asserted.

Vietnam also noted that Beijing is bound by international law and must not repeat the violation while providing reparations for the damage and consequences of the current incident.

The five victims on board Luu’s fishing boat were brought ashore around 4:00 pm on Wednesday in the central province of Quang Ngai.

Officers from the provincial Border Guard and Department of Police arrived to assist the fishermen and gather statements in order to probe the case.

According to Captain Luu, the two large iron-hulled Chinese vessels with serial numbers 46102 and 56103 chased down and rammed his wooden boat.

“I heard a loud noise from the back of the boat before discovering several cracks. Six people on the two Chinese speedboats boarded our ship and surrounded us,” the helmsman recounted.

Luu stated that he was forced to steer his boat after Khanh’s ship despite the damage.

“We were threatened with violence if we did not speed up and ram Khanh’s boat,” he continued.

As Luu’s boat took on too much water and began to sink, a Chinese man, seemingly fluent in Vietnamese, used the radar system to ask Khanh to return and help, the captain recalled.

“It was fortunate that Khanh didn’t fall for their trick and instead chose to observe the situation from a distance,” Luu added.

Officers finished gathering the fishermen’s statement around 7:00 pm the same day before submitting a report to the Ministry of Foreign Affairs and the Fishery Association.

Local authorities also offered VND50 million (US$2,243) as support for Luu and four of his crew members.