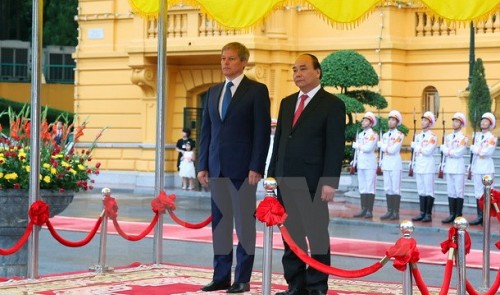 Vietnam and Romania have agreed to boost economic cooperation and provide more favorable conditions for their businesses to connect and collaborate.

PM Phuc expressed his warm welcome to his guest, stating that the trip would be a significant step in the development of the Vietnam-Romania friendship and multifaceted cooperation.

The Vietnamese head of government extended his appreciation for the assistance of the Romanian government and people in the past, before congratulating them on the nation’s recent achievements in its socio-economic development and integration.

Replying to his host, PM Ciolos expressed his joy of being able to visit Vietnam and gratitude for the warm welcome.

He stated that Vietnam was one of Romania’s essential partners in Southeast Asia, hoping to strengthen the two nations’ collaboration in various fields, especially economic matters, trade, and investment.

The two leaders reached consensus on enhancing bilateral trade, encouraging Vietnamese and Romanian businesses to establish connections and partnership in such fields as infrastructure, energy, food processing, water management, tourism, and others.

They also agreed on the strengthening of the two countries' ties in education and training, communications, science and technology, and defense and security.

The two parties expressed their satisfaction with the mutual support of Vietnam and Romania at international forums.

As an active member of the European Union, Romania will assist Vietnam in cementing the relationship with the grouping, and expediting negotiations related to the EU-Vietnam Free Trade Agreement (EVFTA).

With regard to the situation in the East Vietnam Sea, the two leaders shared their concern over the recently complicated development, and reiterated the peaceful settlement of disputes in accordance with international law, namely the 1982 United Nations Convention on the Law of the Sea (UNCLOS) and the Declaration on the Conduct of Parties in the East Vietnam Sea (DOC).

A Code of Conduct (COC) for the maritime area is also hoped to be established soon, which will act as an effective tool to ensure regional peace, stability, security, and freedom of aviation and navigation.

At the end of the talks, PM Ciolos invited his Vietnamese counterpart to pay a visit to his country in the near future.

The two premiers also attended a ceremony to sign several cooperative agreements in the fields of culture, education, and electricity.

The Ministry of Public Security has proposed that the Supreme People’s Procuracy prosecute five former police officers on different charges in a case that involved taking VND2 billion (US$94,000) from a criminal; these charges include abuse of their position and power to appropriate property