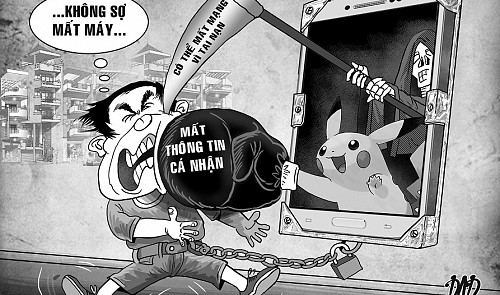 Pokémon GO poses a potential threat to information security and user data, according to Vietnamese experts.

The mobile game was launched by San Francisco-based developer Niantic in Australia and New Zealand in early July, and reached Vietnam and 14 other Asian and Oceanic countries on August 6.

Do Van Thang, director of the Athena Internet Security Center, said that data from the cameras and global positioning system of the players’ smartphones would be sent to the developer’s servers, leading to possible data breach.

“Information retrieved from many people is considered an extremely valuable asset that can be used for different purposes,” Thang remarked.

According to Ngo Tuan Anh, an official at the network security department of Vietnamese technology corporation BKAV, the collection of positions and images captured by Pokémon GO players’ devices could help build an accurate map.

“Such information, if falling into the wrong hands, can turn the mobile game into an extremely dangerous piece of spyware,” Anh said.

‘Trainers’ who try to ‘catch ‘em all’ at sensitive places can risk exposing the areas, the expert elaborated, adding that such a scenario has become a concern of many countries in terms of national security.

Anh also mentioned a probability that users unintentionally install fake Pokémon GO apps, which are infected with malicious codes that can take control of the entire operating system of their phones.

“It is recommended that players download the original application from Google Play and App Store,” he stated.

In order to experience all aspects of the game, players are required to buy Pokécoin, an in-game currency, via Visa or Master card, Thang said, adding that such transactions are performed online and outside of Vietnam’s territory, which will cause difficulty solving any problem that may emerge.

A large number of bogus websites designed to steal user information via the sale of Pokécoin has also been created to trap unsuspecting players, Thang continued.

Players can unknowingly disclose their credit information when they lend their Visa or Master accounts to their fellow ‘trainers,’ he added.

According to Nguyen Huu The Trach, a Vietnamese lawyer, Pokémon GO has been registered as a mobile game service and approved by the Ministry of Information and Communications after meeting certain legal requirements.

With regard to the data breach potentially faced by players, the Vietnamese law states that any release of information must be authorized by its owners, Trach said, adding that violators are required to compensate for any consequence.

The law also requires game developers to ensure information security for their clients, the lawyer continued.

The purchase of in-game currency is legal but can be the cause of such crimes as theft and robbery, he added.

According to the experts, ‘trainers’ should protect themselves from all of the risks so as to have a safe and enjoyable experience in the Pokémon world.

Meanwhile, competent agencies will continue to work with its developer on legal procedures in accordance with the law.