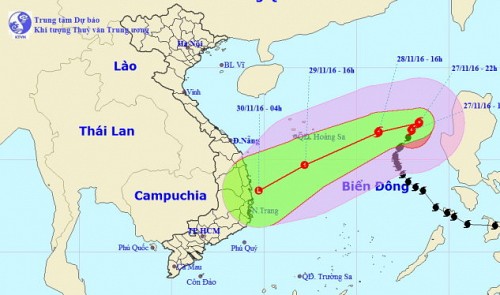 The Vietnamese military has put nearly 180,000 people, aircraft, ships and other equipment on standby to cope with a storm forecast to cause rough seas, floods and land subsidence this week.

Just over 179,000 soldiers and paramilitary men have been put on notice to help local communities and residents along the coast deal with the storm Tokage brewing in the East Vietnam Sea.

As of Sunday afternoon, the defense ministry had ordered border soldiers along the coast from Quang Binh to Ba Ria-Vung Tau Provinces to coordinate with local governments and residents to inform 58,000 ships and 380,000 employees of ongoing developments and the path of the storm.

Almost 1,200 ships and 10,000 employees are already operating in the middle and north of the East Vietnam Sea, including Vietnam’s Hoang Sa (Spratly) archipelago. Others are fishing or anchored along the coast.

Storm Tokage will weaken to a tropical low-pressure system, causing rough seas in the northern part of the East Vietnam Sea, including Hoang Sa, on Tuesday night, weather forecasters have said.

The storm is expected to move west-southwestward at 10-15km an hour over the next 24 hours, building up speed 380km east of Hoang Sa at 7:00 pm on Monday night. Winds of up to 60-75km per hour are predicted near the storm’s eye.

Over the following 24-48 hours, Tokage will head west-southwestward at 15-20km per hour before weakening to a tropical low-pressure system.

At 7:00 pm on Tuesday night, the center of the low-pressure system is anticipated to be 260km south of Hoang Sa, carrying winds of up to 40km per hour.

The northern part of the East Vietnam Sea, including Hoang Sa, will be hit by strong winds, rough seas and high waves due to the tropical low-pressure system.

The region from Da Nang City to Khanh Hoa will experience heavy rain from Wednesday to Friday, possibly accompanied by flash floods and land subsidence.

Later, rain is expected to fall in the area from Nghe An Province to Thua Thien Hue Province.