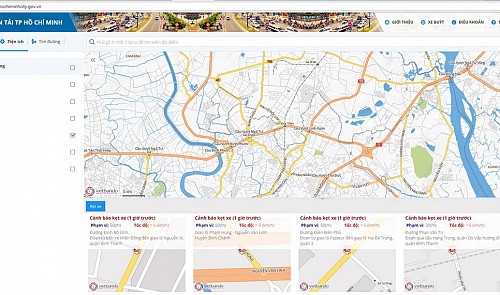 The Ho Chi Minh City Department of Transport has announced the launch of a digital traffic map aimed at informing commuters of traffic congestion in the city in a bid to alleviate congestion on busy routes.

The free-of-charge traffic widgets were officially launched by the municipal transport department on Thursday to give commuters better access to traffic information across the southern hub.

To access the widgets, users can visit www.giaothong.hochiminhcity.gov.vn on their computers or mobile phones or download the ‘TTGT Tp. Ho Chi Minh’ app on Android smartphones.

According to Tran Quang Lam, deputy director of the city’s Department of Transport, the website is designed with four primary functions which operate using data collected from the city’s traffic cameras and other specialized sources.

Accordingly, the application updates its users on real time traffic, including the volume of traffic and the average speed of vehicles traveling on specific streets.

Congestion, construction, and renovation warnings are also provided and users can access traffic flow images from several hotspots throughout the city captured by a system of over 300 transport department operated cameras.

The service can recommend the most suitable route for commuters to reach their destination, helping them avoid certain streets with serious gridlock or where accidents have occurred.

During the upcoming Lunar New Year holiday on January 28, citizens will also be able to acknowledge where local festivals are organized.

The website is equipped with a tool to receive reports from residents on any shortcomings regarding traffic infrastructure and administrative procedures.

The digital map will be accessible 24/7 to serve people in the city, Deputy Director Lam stated, adding that it will be upgraded regularly.

Le Van Khoa, vice-chairman of the municipal People’s Committee, has praised the transport department’s efforts, particularly the fact that the initiative is a non-structural measure to curb traffic jams in the metropolis.