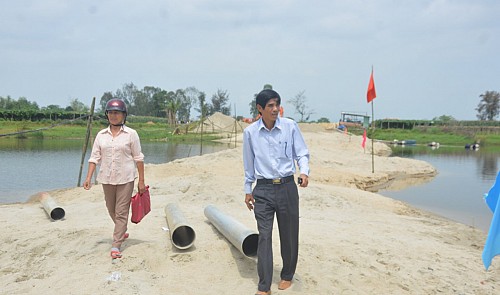 Residents of a small village in central Vietnam have been willing to ‘donate’ their agricultural land in order for a bridge's construction to go ahead in the area.

Farmers of Phuoc My Village have expressed their willingness to forfeit part of their land in order for the construction of a bridge that will connect the village with the rest of Nam Phuoc Town, in Quang Nam Province, to proceed.

According to Nguyen Thinh, the chief of Phuoc My Village, the central government agreed to provide financial assistance for the construction of a concrete bridge in the village back in 2012.

However, the plan was contingent on 16 households in the area agreeing to contribute a portion of their farming land, Thinh said.

The leader decided to bring up the issue directly to each resident, and was amazed by their goodwill and unconditional support.

“The result was beyond my expectation,” he said, adding that the residents had agreed to donate a percentage of their land as soon as they heard about the construction of the bridge.

Some residents had to hand over hundreds of square meters while others had to sacrifice up to a few thousand.

None of them asked for compensation and happily signed the documents verifying their approval, according to Thinh.

The farmers have recently completed their final harvest on these parcels of land, before construction on the bridge begins later this month.

According to Le Van Chin, one of the 16 local farmers, his land belonged to his ancestors, thanks to which he and his family had been able to earn a stable living for generations.

“As the state will build a bridge for our village, there is no reason for us to say no, although our future harvets may be affected,” Chin said.

With building materials currently being transported to the site, residents of Phuoc My Village can now rest assured that their lives will be improved once the bridge is finished.

Children will no longer fear crossing the river to go to school, and local farmers will not have to transport their heavy products on overloaded boats.

Villagers will neither have to waste their time and effort building unsafe makeshift bridges that can be easily washed away by floods.

All await the completion of the bridge and have expressed their great appreciation toward the 16 families and their selfless act for the sake of the community.