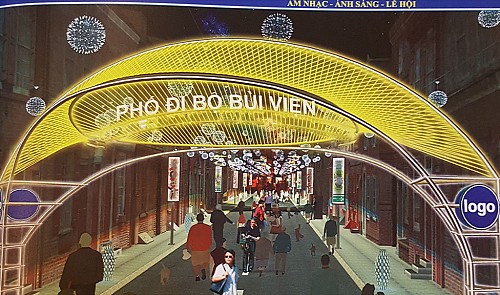 Ho Chi Minh City’s famous Bui Vien Street, located in the heart of the city’s ‘backpacker area’, is set to become a pedestrian-only thoroughfare on weekend evenings from the middle of next month.

The Bui Vien Walking Street in District 1 will officially debut on July 15, the city’s leaders confirmed during a meeting on Thursday afternoon.

Chairing the gathering, vice-chairman of the municipal People’s Committee Tran Vinh Tuyen stated that the pedestrian road will be active from 7:00 pm to 2:00 am every Saturday and Sunday.

To give visitors the opportunity to experience a more artistic side of Vietnam, performances will be held on two stages on weekend nights between 8:00 pm to 10:00 pm.

The shows will themed in the spirit of street art, Vice-chairman Tuyen elaborated, adding that tourists will also be permitted to perform.

“The time reserved for certain shows will be shorter. What really matters is the quality of the performance,” he stated.

According to Nguyen Thi Thu Huong, vice-chairwoman of the People’s Committee in District 1, local residents have been asked for their feedback on the walking street project and have been informed of the current plan.

The administration has also earmarked VND10.8 billion (US$476,572) for renovating and covering the sidewalks of Bui Vien Street with granite tiles, Huong continued, adding that the work will be finished in September.

Vice-chairman Tuyen praised District 1’s administration on their efforts to improve the area; however, they reiterated that the walking street must open in July instead of September.

The official also suggested that local authorities pay attention to families who will be affected by the project.

“Despite support from the majority, we cannot overlook opposing opinions. People should be encouraged to facilitate the plan rather than be forced to do so,” he remarked.