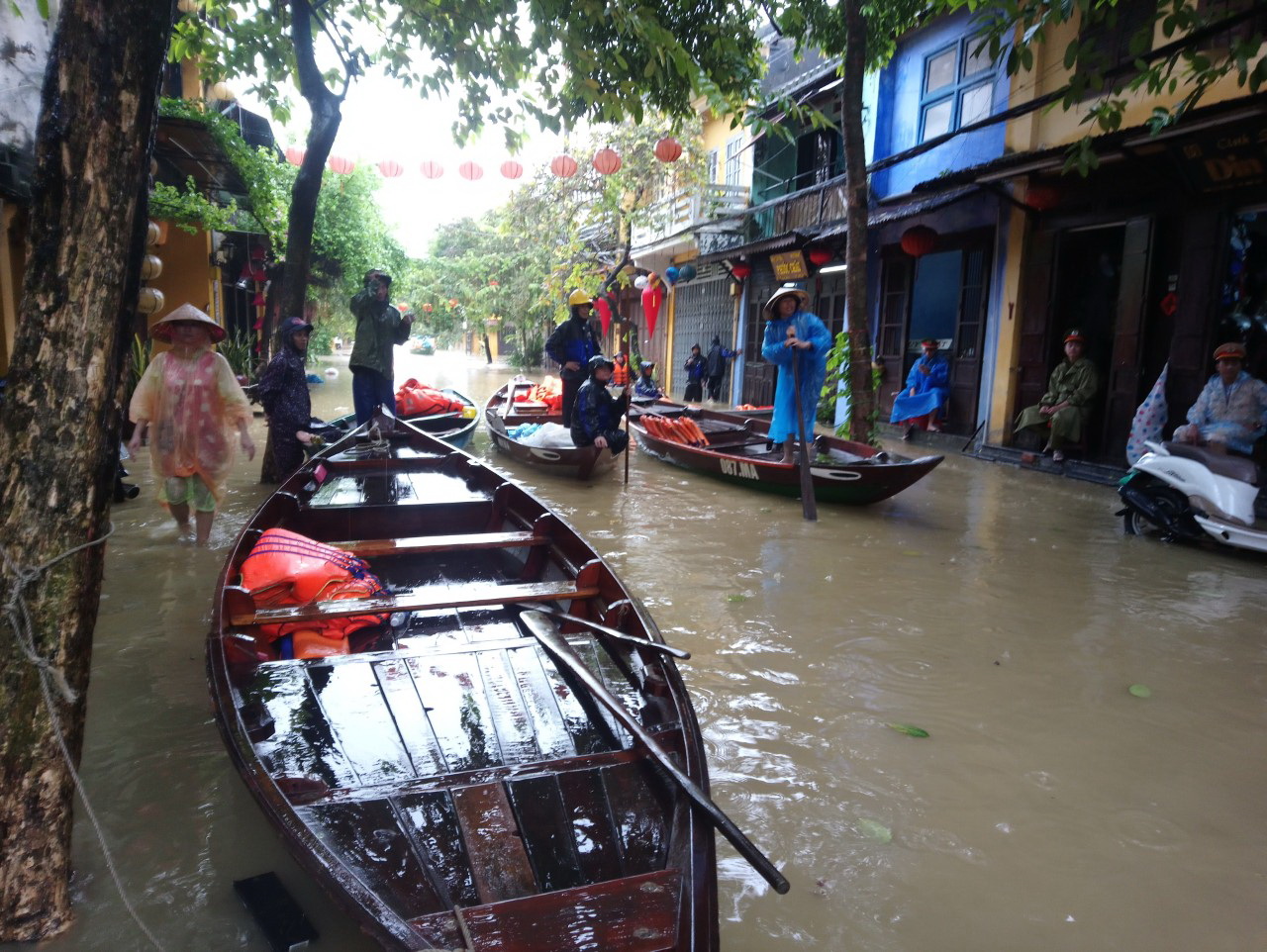 Soaked to the bone in Hoi An

The scale of the flooding is set to be as bad as previous major floods and it’s not over yet with predictions of more rains to pound the mountainous areas particularly, compounding the problems for everyone.

Although we had warnings of major flooding through social media, local Party broadcasts and the weather services, it’s still a shock when you see the water begins to pour into streets – like a disaster movie in slow motion and rise in the time it takes you to have a decent breakfast. I got my taste of this on Saturday last week, as a farmer hurriedly moved his cows up the street as I sat finishing my second coffee in my regular haunt.

This is about my sixth major flood in Hoi An in the past ten years and it never ceases to amaze me as a first-hand experience. Standing in the middle of a flooded street, battling the strength of the water surging past and trying to stay upright are hard enough!

Although locals take the event more or less in their stride, it’s more startling to tourists suddenly finding themselves on a boat being evacuated out of their hotels to an uncertain day seeking a hotel room on the high ground to the north and west of Hoi An City. It’s funny and sad at the same time as bemused and half-exhausted middle-aged Westerners, half soaked in cheap raincoats, stagger on to dry pavements, trudging their luggage behind them.

Frantic calls were put out this morning from expats and tourists trying to get boats to high ground but it hasn’t been a big problem. Interesting how the locals monitor our social forums – within minutes messages were zapping around with offers of boats (and jeeps!) to get people out.

As the tragic side of this story unfolds outside Hoi An with 27 reported dead and more than 20 missing, there have been no reports of personal injuries within the city area at this time.

One feature of these floods is the reaction of locals. Some enterprising souls hire out their boats (up to 200,000 dong for tourists!) while the local riverside market have moved up three blocks and promptly continued trading. Other tough locals are still roaming the streets with their portable food stalls selling hot food and snacks.

The waters had risen so fast in some places near the river in town that people chose to ride out the storm in their second floor encampments only to have to get neighbors to fetch ladders and boats to bring people to high ground. In general, I notice that the locals don’t stock a lot of food except rice; however, that’s easy to cook even without electricity.

For the most part, I think the local authorities have done a fairly good job in assisting people in getting boats into town and placing locals out along the agricultural areas to keep an eye on floods, water locks and on the lookout for trouble. Pretty tough job in this weather!

At the moment, our neck of the woods is waiting on the water levels – will they go down enough? Will the rains rebound with heavy downpours? Will the rain continue throughout the week? A lot will depend on if the ground can absorb more water and draining into the ocean. Current consensus is the rain will continue and that’s going to take a hard toll on local livelihoods outside the town. Hoi An’s tourism trade usually takes a downturn with the winter rains but manages well enough.

Hopefully the aftermath of this storm is not far away. This is when you really see the locals go into action with chainsaws and water trucks hosing the muddy streets. It’s surprisingly efficient – two years ago, the floodwaters were about the same yet the whole town was up and running in less than two days.

With the horrible prediction by some weather services of another storm hitting southern Vietnam by the end of the week, I would like to say good luck and travel safely to the tourists – and to the locals, a million thanks for all the help you have given total strangers, friends, neighbors and foreigners. You are what makes living here so worthwhile!