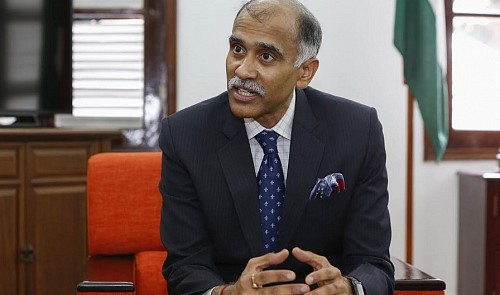 A US$100 million contract will be signed between Vietnam and India to provide the former with high-speed patrol boats within the framework of the upcoming official visit to Vietnam of Indian Prime Minister Narendra Modi.

During an interview with Tuoi Tre (Youth) newspaper, Indian Ambassador to Vietnam Parvathaneni Harish has given some insight into the trip of Prime Minister Modi, scheduled for September 2 - 3.

This is the first visit to Vietnam of an Indian head of government in 15 years, Ambassador Harish stated, adding that many significant documents are expected to be signed between the two parties.

“The Indian leadership has focused on its Act East Policy in which our Strategic Partnership with Vietnam is a major pillar,” he said.

Collaboration between India’s M/s Larsen & Toubro Company and Vietnamese Border Guard is highly anticipated for the construction of high-speed patrol boats based on the Line of Credit of US$100 million, according to the diplomat.

“We expect conclusion of many agreements and MOUs in important economic, social and strategic sectors including in the fields of science and technology, information technology, defense and security, health, and especially cooperation in traditional medicine systems in our two countries,” he continued.

Vietnamese public servants and students will also be granted 200 scholarships to support their studies and research in India, Harish added.

Regarding the disputes in the East Vietnam Sea, the ambassador stated that the maritime area played an important apart in India’s global trade.

Mumbai supports the freedom of navigation and overflight, and unimpeded commerce in the seaway in accordance with international law, especially the 1982 United Nations Convention on the Law of the Sea (UNCLOS), he asserted.

The South Asian country believed that relevant parties should settle their differences using peaceful measures and not to apply force or the threat of violence for the sake of regional peace and stability.

Addressing the prospects of defense and security ties between India and Vietnam, Harish said there had been strong cooperation between the two militaries, primarily navies and coast guard forces.

The diplomat mentioned the successful visit to Vietnam of Indian defense minister Manohar Parrikar in June under the invitation of his Vietnamese counterpart Ngo Xuan Lich.

Vessels from the Indian naval force have also made frequent visits to Vietnam’s seaports, he said, adding that the current naval ties will also be fostered during the Indian Prime Ministers’ visit.