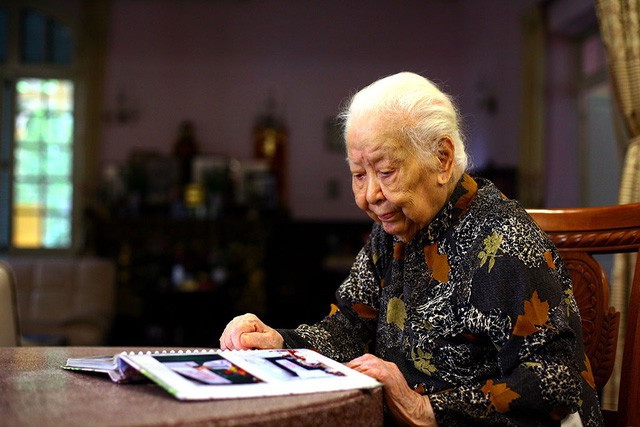 A state funeral will be held for a centenarian, who, along with her late husband, voluntarily donated an equivalent of over US$8 million to Vietnam’s revolutionary government back in 1945.

The Central Committee of the Vietnam Fatherland Front will hold the state-level funeral for Hoang Thi Minh Ho, who passed away at 104 at her own home in Hanoi on Sunday last week.

Ho was widow of patriotic bourgeois Trinh Van Bo, who voluntarily contributed 5,147 taels of gold to the revolutionary government in 1945.

One tael is equivalent to VND36 million (US$1,572) in the current foreign exchange rate.

Her coffin will lie in state at the National Morgue at No. 5, Tran Thanh Tong Street, Hanoi.

She will be buried the same day at Mai Dich Cemetery in the capital.

Ho was born in 1914 in the capital city to a Confucian scholar and an opulent merchant in the then Hang Dao Street.

At 18, she married Trinh Van Bo before inheriting a house at 48 Hang Ngang Street and a silk store named Phuc Loi.

Upon the resounding success of the August Revolution, an uprising launched by the Viet Minh (League for the Independence of Vietnam) against French colonial rule in Vietnam on August 14, 1945, through the introduction of an acquaintance, the patriotic couple at their discretion dedicated part of their house to the revolutionary officials as their workplace.

The couple was unaware that late President Ho Chi Minh, who led the government, was among the officials.

It was during his stay at the house that President Ho Chi Minh composed the Declaration of Independence which ushered in the birth of the Democratic Republic of Vietnam.

Only a few days after, in enthusiastic response to the government’s Tuan Le Vang (Gold Week), Bo and his wife contributed the enormous amount of the precious metal to the then empty state coffers.

The couple also played a crucial role as the campaigners of the Gold Week, raising 20 million French Indochinese piastre, the currency of French Indochina between 1885 and 1952, and 370kg of gold from local merchants and other social classes.

A street in Cau Giay District, Hanoi will be named for Trinh Van Bo, according to a resolution recently submitted by the Hanoi People’s Committee to the municipal People’s Council.

The street will be among the 20 new and five current ones that will have their lengths adjusted.

The municipal People’s Council fifth plenum, slated for early December, will consider the resolution for approval.

Trinh Van Bo Street is expected to span 1.2km and has a width of 7.5m.

It will stretch from the Nguyen Dinh Hoan intersection to the Phung Chi Kien T-junction.

His father was Trinh Phuc Loi, a merchant in the early 20th century.

His mother, of Chinese origin, helped his father successfully run the Phuc Loi silk store, which not only supplied products to domestic clients but also traded items with neighboring countries and even China, India and Switzerland.

In 1932, he married Ho and elevated their inherited silk store to further prosperity.