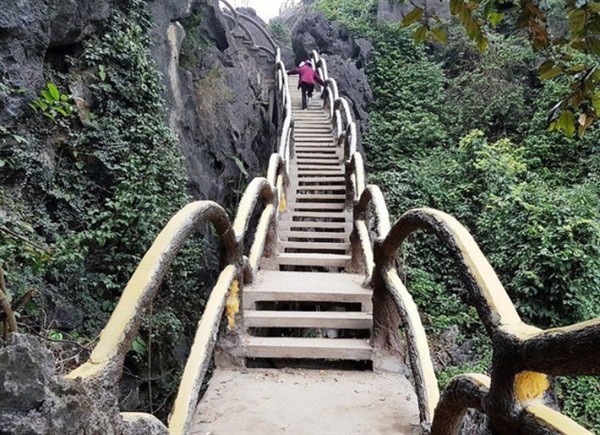 The site is Trang An, an area of majestic scenic beauty, steeped in history and prehistory

Vietnamese authorities have ordered the removal of an entire unlicensed artificial structure impinging on one of the UNESCO World Heritage Sites in Vietnam.

Inspectors from the Ministry of Culture, Sports and Tourism required the destruction of all the flights of stairs leading to the top of Huyen Vu Mountain, located in the Trang An Landscape Complex in Ninh Binh Province, the southern edge of Vietnam’s Red River Delta.

The Trang An Landscape Complex is a breathtaking landscape of limestone peaks, interspersed with valleys overwhelmed by towering cliffs, which contains archaeological traces of human habitation since the prehistoric times, according to the UNESCO’s website.

Rice paddies and villages also exist here, alongside temples and pagodas nestling in the mountains.

The Trang An Landscape Complex is ranked as a special national heritage location by the Vietnamese prime minister, according to Pham Xuan Phuc, deputy director of the ministry’s inspectorate.

A serious wrongdoing, he said, was made in mid-2017, when Trang An Tourist Company began building a gate and a series of over 2,000 steps spanning one kilometer in total without approval from the government.

The company has completed the structure within six months and is now likely forced to halt all its operations as a punishment.

Phuc said the management of the Trang An Landscape Complex had submitted a report on the construction to a relevant superior authority, the Ninh Binh Department of Tourism, which then issued a decision asking the authorities in Hoa Lu District, where the structure sits, to take action to remove all the construction materials and restore the heritage site to its original state.

From August 2017, Trang An Tourist Company ignored five official orders to stop the illegal building, continuing its activity until the end of 2017, when the stairs were set for use.

Phuc said the creation of the structure and its destruction alike have inevitable negative impacts on the Trang An Landscape Complex.

The Hoa Lu District administration is tasked with dismantling the stairs and promises to deal with the consequences of the construction.

Failing to respond to four requirements for a report on the incident from the higher authority, the provincial Department of Tourism, the company bears the main responsibility for the case, Phuc said.