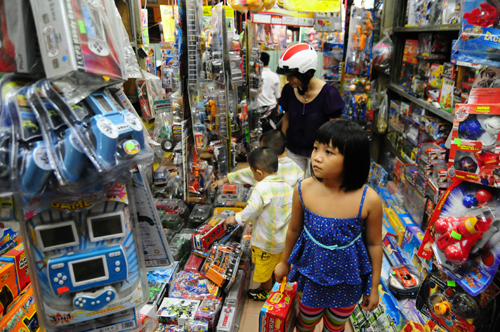 Relevant agencies in Ho Chi Minh City have been collecting samples of the Chinese toys available in the city for safety and toxicity tests during a campaign for the upcoming Children’s Day.

The agencies said they will focus on checking the products’ labels, Conformity with Regulation stamps, and their safety and quality standards.

Initial results show that a number of such toys are made from toxic and cancer-causing substances, especially those found at children’s toy shops in District 5 and 8, which are flooded with Chinese toys, according to officers.

For instance, the made-in-China animal toy that children can ride on contains a high level of phthalate, which can severely impact children’s health, officers said.

This toy, which comes in the shape of cows, deer and ponies, was recalled in Singapore late last year following similar toxic test results.

The officers also took samples of several toys from two shops on Cong Hoa Street, whose stocks are all imported from China, for quality tests.

The inspection campaign will last until May 30, they said.

In the latest Chinese toy scandal in Vietnam, a three-year-old girl was hospitalized on May 10 after she swallowed a Chinese water bead and suffered bowel obstruction.

The toy is sold widely across the country while doctors have repeatedly warned of its harmfulness because the beads are likely to fall into the children’s mouths and may block their respiratory system.