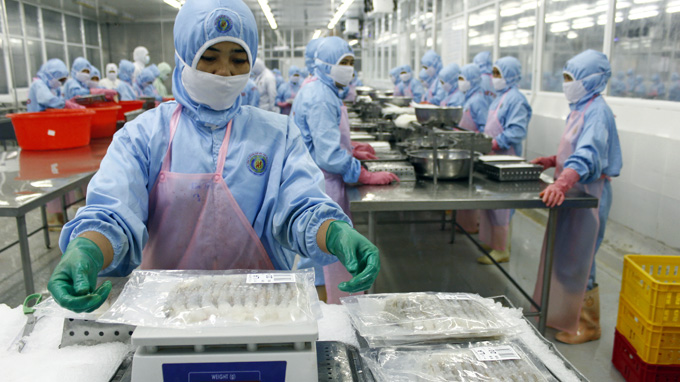 Though Vietnam's economy was riddled with difficulties in 2013, there were some noteworthy positive signs of a more sustainable recovery in 2014-2015. Let's take a look at the 10 most prominent economic events of 2013 chosen by Tuoi Tre.

The most notable economic occurrence of 2013 was the lowest inflation rate recorded in 10 years, reaching 6.04%, far less than the 8% target set by the National Assembly earlier in 2013.

Total gross domestic product (GDP) growth was estimated at 5.42%, bringing the country's total GDP to over VND2,500 trillion in value, marginally lower than the 5.5% target set by the NA, but still higher than 2012’s rate of 5.25%.

In 2013, SBV lowered many main policy rates, lending rates for short-term loans to prioritized sectors, and maximum depositing rates by 2%, 3%, and 1% per annum respectively. Since June 2013, SBV also allowed local credit institutions to fix the long-term depositing interest rates from 6-month periods and up.

With the SBV’s rate adjustment, lending interest rates for local businesses were reduced by 2-5 % per annum compared to those of 2012, ranging at the common rates of the 2005-2006 period. By the end of the year, interest rates on existing loans were less than 13% per annum, while the lending rates for new short-term loans hovered at only 8-9% per annum.

The dramatic decrease of gold prices made the role of gold investment – usually a safe haven – fade away in 2013.

At the end of year, the exchange rates at the commercial banks were listed at around VND21,085 per dollar and VND21,125 per dollar for bid and ask, respectively.

With the stabilized exchange rate, SBV was reported to buy many billions worth of foreign currency to feed the national forex reserves estimated at around $30-32 billion, which, in turn, helped increase the value of the Vietnamese dong.

The stock market saw a year of recovery with strong growth and a healthy state of liquidity. Both local stock indices increased compared with the end of 2012, while the benchmark VN-Index of Ho Chi Minh Stock Exchange and HNX-Index of Hanoi Stock Exchange gained 21.97% and 18.83%.

The local stock market also became one of the best-performing markets in the world and the fastest-growing market in the Southeast Asian region.

Pursuant to Government Resolution No. 02, SBV issued Circular No.11, offering a VND30 trillion credit package to support social housing buyers. The package is expected to be one of the fundamental solutions to relieve the burden of mounting unsold local real estate stock.

However, as of mid- December, the disbursement rate was reported to hit VND555 billion, or less than 2% of the total value of the package, according to the Ministry of Construction.

The end of 2013 saw a series of serious corruption trials held in the economic field, including 8 relating to wrongdoings in the banking sector. A corruption case involving Agribank Leasing Co 2 - a finance leasing arm of Vietnam’s biggest lender, Agribank – which caused a loss of nearly VND532 billion for the state budget, was tried in October 2013 and resulted in two death penalties.

Another case involves Huynh Thi Huyen Nhu, 35, the former deputy head of the Risk Management Department of the Vietnam Joint Stock Commercial Bank for Industry and Trade (Vietinbank). She is charged with “abusing trust to appropriate assets” and “counterfeiting seals and materials of agencies and organizations” for swindling many individuals and banks of nearly VND4 trillion (US$188.7 million).  The case is being tried.

One of the most noteworthy cases in 2013 involved banking tycoon Nguyen Duc Kien, whose arrest sent shockwaves across the country in August 2012. He was accused oftwo charges, “intentionally violating State regulations on economic management, causing serious consequences” and “cheating to misappropriate other people's assets”, causing a loss of VND1.7 trillion. The case will also be heard in January 2014.

Officials involved in the negotiations on the Trans-Pacific Partnership (TPP) trade agreement say there are still a lot of negotiations to be made with other countries.

TPP sets the standard for free trade and investment in the future, so if they are successful in negotiations, it will be easier for Vietnam when negotiating other free trade agreements (FTA) like the FTA with the European Union ( EU ) and the Customs Union of Belarus, Kazakhstan, and Russia.

A new milestone was marked at the 17th round of talks in Peru when Japan officially joined as the 12th member. Although it was expected to be completed before the end of 2013, the TPP remains unfinished because many issues have yet to reach a consensus among the member countries.

If concluded and successfully signed, the TPP will enable 90% of tariff lines of goods traded among the 12 member countries to be exempted- Australia, Brunei, Chile, Canada, the U.S., Japan, Malaysia, Mexico, New Zealand, Peru, Singapore, and Vietnam.

8. FDI on a rise, investigation on transfer pricing at FDI firms launched

Newly registered foreign direct investment (FDI) capital in 2013 increased by $7.6 billion, an increase of 54.5% over the same period of 2012, to $ 21.6 billion as of Demceber 15, bringing the total registered FDI capital in Vietnam to $78.5 billion, according to the Foreign Investment Agency under the Ministry of Planning and Investmen. FDI disbursement in 2013 was estimated at U.S. $11.5 billion, up 9.9 % from 2012. These are impressive numbers given the difficult period the world economy was still facing.

Along with the attraction of new FDI, the fight against transfer pricing in foreign businesses began heating up in 2013, as the typical transfer pricing mechanism became increasingly sophisticated. Dozens of large foreign enterprises were also put under watch, but so far no case was determined without proper evidence.

In September, Western Bank merged with the PVFC to become PvcomBank. A new group of investors bought 85% stake in TrustBank, and renamed it the Vietnam Construction Bank.

A notable merger in 2013 was the M&A deal between DaiABank and HD Bank. After the merger, the name DaiABank became obsolete. In addition, HD Bank also bought French financial company SGVF to turn it into a 100% locally owned firm.

There was a series of cases in which Chinese traders bought Vietnamese agricultural products from local farmers so that they could manipulate the local market. Besides investing in a large yam growing area in the Mekong Delta’s province of Vinh Long, Chinese traders competed with local traders by buying a surplus of crabs and shrimps, causing dire consequences for both local farmers and traders when they suddenly stopped doing so.

The most frequent move of Chinese traders is to dramatically increase and then lower buying prices, combined with the initiative of buying goods in very large volumes in order to manipulate the market in their favor.