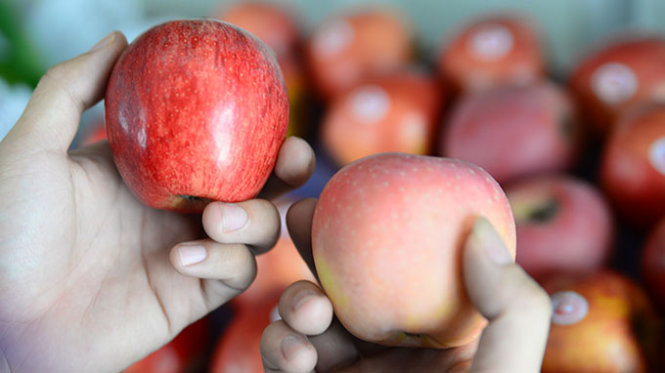 Vietnamese regulatory agencies are pointing fingers at each other over the question of which of them should be held responsible for Chinese fruits bearing fake U.S.-grown labels, which are widely sold at local markets.

Chinese fruits imported to Thu Duc Agriculture Wholesale Market are distributed to smaller wholesale markets, and finally to traditional markets and fruit stores citywide, with their Chinese origins ‘erased’ and replaced with bogus stamps claiming they were grown in the U.S. or New Zealand.

Thu Duc market is the largest wholesale market for fruit and agro-produce in Ho Chi Minh City, and it also supplies produce for the southern city’s neighboring areas.

A number of consumers have purchased and eaten what they believed to be U.S. apples, oranges, pears, or grapes, while they were in fact grown in China.

A representative of the Ministry of Agriculture and Rural Development (MARD) said the ministry’s Plant Protection Department is responsible for granting quality certificates for fruit imports before they are allowed to clear customs.

However, once the products have been marketed, it is the responsibility of the Market Surveillance Department, under the Ministry of Industry and Trade, to oversee them, the MARD official told Tuoi Tre (Youth) newspaper. The market watchdog agency will handle trade fraud or cases related to products with dubious origins, he added.

Nguyen Xuan Hong, head of the Plant Protection Department, asserted to Tuoi Tre that the department has regularly conducted joint inspections at the fruit market.

But Hong refused to answer whether his department had ever detected any batches of imported fruits with fraudulent origins.

Economic expert Ngo Tri Long said the market watchdog agency and the Vietnam Food Administration (VFA) must be responsible for the distribution of low-quality Chinese fruits in the market.

The VFA is a Ministry of Health unit tasked with managing food hygiene, safety, and quality.

Long said inspections by these agencies are not effective enough, as the fruits are not only officially imported, but also transported across the border.

“The fruits can even reach consumers before they undergo any checks,” Long added.

The economic expert added that it is unacceptable to allow fruits with bogus stamps and labels to be sold so widely.

“We must strictly penalize those responsible for the issue in order to have tighter control over Chinese fruits,” he concluded.

No one sells Chinese fruits?

Even though several hundred metric tons of Chinese fruits arrive at Thu Duc Agriculture Wholesale Market every night, from which they are immediately distributed, no fruit sellers, from supermarkets to small markets, will admit that they are selling Chinese-grown products.

Co.op Mart, Big C, and Lotte Mart said none of the apples available at supermarkets under their management are from China.

There are only apples from the U.S., Australia, and New Zealand on the shelves at these locations, according to an observation by Tuoi Tre.

Major fruit stores in Districts 1 and 4 also claim their fruits are from the U.S., New Zealand, or Chile, while none are from China.

“As consumers are losing trust in Chinese fruits, some traders have placed fake U.S.-grown labels on their products to ‘assure’ buyers,” Thu Nga, a wholesaler at a market in Hoc Mon District, revealed.

Despite bearing U.S. labels, Chinese fruits are sold at low prices and “consumers who are attracted to the cheap prices will be fooled,” Nga said.