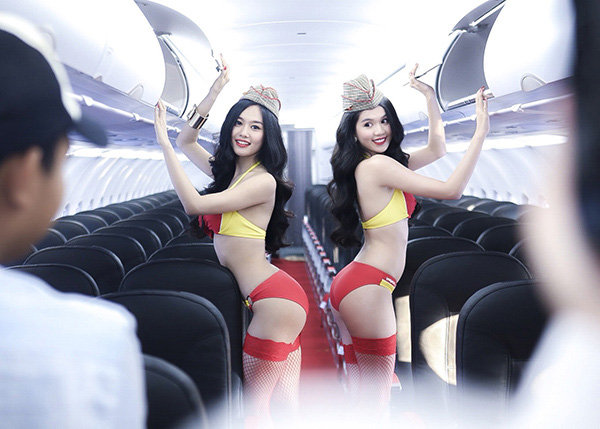 A series of photos of bikini models posing in an apparent ad campaign for low-cost carrier VietJet Air that has gone viral on social networks and newswires in Vietnam since Thursday night are not official promotional photos, the airline said Friday.

The controversial photos were “leaked from a test shooting under a contract between VietJet Air and Venus and are not the official promotional photos of VietJet Air,” the Hanoi-based airline said in a statement.

Nine models from famous local modeling agency Venus are seen in the photos, which lingerie model Ngoc Trinh posted on her Facebook page on Thursday night, saying they had been “shooting for an ad campaign by VietJet Air.”

As seen in the pictures, the models, sporting skimpy two-piece swimsuits, posed in front of, next to, and onboard VietJet Air planes.

There were also behind-the-scene photos in which the models smile, play and take selfies in their yellow and red – the airline’s colors – bikinis.

Ngoc Trinh, infamously known as ‘the lingerie queen,’ added a caption saying, “Just finished shooting promo photos for VietJet Air for 12 hours nonstop from 9:00 am to 9:00 pm,” before deleting its around noon Friday.

The no-frills carrier said the photos are “uncensored” and have been “leaked beyond VietJet Air intention and control.”

“Some of the photos are selfies taken by smartphones and are not shot by VietJet Air. We are not responsible for the leak,” the airline said.

While the photos have been removed from Ngoc Trinh’s Facebook, they have been reposted in a number of local newswires.

“We are sorry for the incident and are enacting necessary measures to prevent these ugly and unofficial photos from spreading,” VietJet Air said.

The bikini photos have triggered mixed responses from the online community.

While some blast both the airline and the models for what they deemed “an inappropriate publicity trick,” others say VietJet Air most is to blame.

“The models just did their jobs, it is VietJet Air who is to blame for repeatedly using bikini models in its promotional campaigns,” one of the comments under the controversial photo album reads.

Other people think it is normal for an airline to use women in bikinis for an ad campaign.

“It’s normal. They are not posing naked. The airline reserves the right to do what they want,” Anh Quang, a Tuoi Tre Online reader, commented.

Nhien, who commented below Quang, saw the photos as “fun and friendly.”

“Why be so conservative toward a type of publicity that other international airlines have used long before?”

This is not the first time VietJet Air uses bikini models to grab media attention.

In 2012 the no-frills airline had its flight attendants perform a Hawaii dance in bikinis on its inauguration flight between Ho Chi Minh City and the coastal city of Nha Trang, which resulted in a VND20 million (US$941) fine.

Last May passengers on VietJet Air’s maiden flight from the southern Vietnamese city to Singapore again blushed as the carrier used bikini dancers to celebrate the launch of the new route.