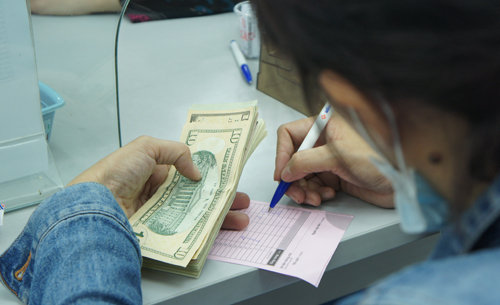 The recent sharp increase in foreign exchange rates following the appreciation of the greenback on the world market has sparked public concerns over further depreciation of the Vietnamese dong, which was devalued by one percent to VND21,458 to the dollar on January 7.

The official exchange rates between the Vietnamese dong and the dollar quoted at many state-run and joint-stock commercial banks on Monday surged around 0.5-0.6 percent in comparison with those of late last week.

The price of the greenback quoted at state-run Vietcombank, often considered the benchmark for other joint-stock commercial banks, rose VND125 per dollar to VND21,450-21,510 for bid and ask, respectively.

At other banks, the exchange rate adjustment ranged from VND100 to VND120 per dollar.

Notably, the difference between the bid and ask prices of the greenback continuously expanded, even up to VND80 per dollar, instead of the normal discrepancy of VND40-50 per dollar, an unusual signal of the domestic foreign exchange market, according to newswire Vietnamplus under the Vietnam News Agency.

Many experts told Vietnamplus that they believe that the difference in gold prices inside and outside the country is one of many reasons for the surge in foreign exchange rates.

The local price is now around VND5.4 million per tael more expensive than its world counterpart. (1 tael = 37.5 grams)

The cheaper world gold price has triggered higher local demand for gold, causing many small hoarders to grab dollars by all possible means to import gold to sell on the domestic market, Vietnamplus reported.

Currently, the U.S. dollar is at a 12-year high against a basket of currencies due to the U.S.’s economic growth exceeding expectations, coupled with the increasing possibility that the Federal Reserve will raise interest rates in the middle of this week's policy meeting.

The rise in value of the greenback has driven a series of central banks around the world to devalue their currency.

Thailand last Wednesday became at least the 23rd central bank to pull the trigger on monetary easing this year, getting its shots in before the Federal Reserve is forecast to raise interest rates, Bloomberg reported.

Many Vietnamese experts have shared their opinions on a further foreign exchange rate adjustment to back local goods and support exports.

As the currencies of many other countries have depreciated, their exports to Vietnam will be relatively cheaper than their Vietnamese counterparts, thus making it hard for local goods to compete in their home market, according to a  report on Vietnam’s macroeconomic situation of the Hanoi-based Vietnam Institute for Economic and Policy Research.

Moreover, Vietnamese shipments to a specific market, like the U.S., will be more expensive than goods made in a place where the currency was devalued, said the report of the institute under the University of Economics and Business – a member of the Vietnam National University system.

The State Bank of Vietnam should actively devalue the dong by 3-4 percent every year for the next two-three years, through a number of smaller steps within the 1-1.5 percent range, to help raise the competitiveness of Vietnamese goods, said the report, which was released on February 25.

In early 2015, Governor of the State Bank Nguyen Van Binh confirmed that the central bank will adjust the exchange rate between the dong and the dollar flexibly, but the rate will not exceed two percent.

But Thanh Tuyen, an economics columnist of Tuoi Tre (Youth) newspaper, wrote that a promise from the chief of the central bank is not enough, and the pledge needs to be realized via concrete actions.

“The decision to hold the Vietnamese dong or U.S. dollar depends on the efforts by the SBV to strengthen confidence in the dong,” Tuyen said.

A rate adjustment will be welcomed by exporters and experts who want to promote exports, he said, adding that local people will not be happy when it happens as it devalues their currencies against the U.S. dollar, and brings in inflation.

Perhaps with the message of "allowing the rate to rise no more than two percent" of the SBV governor, and a 1-percent rate adjustment to take the initiative at the beginning of the year, the future of foreign exchange rates would be clear, the columnist commented.

Given the concerns of the market, the SBV had chosen to stay silent, Tuyen said.

It would be better if the SBV reiterates that it will keep its promises whatever happens, as doing so will definitely build more trust among the public, he suggested.

Public confidence has not been strengthened dramatically, as it will take much longer for trust to be developed, the columnist remarked, concluding that the promise is not enough to win the heart of the public, for the time being the SBV must offer timely and comprehensive information to explain what and why it has chosen to do.