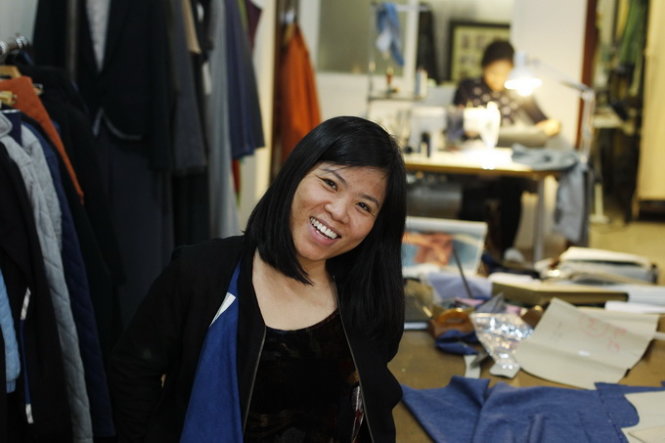 A Vietnamese woman has carved out a fruitful design career with her ecologically friendly, custom-made fashion items and single-mindedly targeted the European market over the past few years.

Vu Thao, 35, trained to become an English teacher, but destiny has its own course.

Shortly after graduating from a pedagogical university, Thao found herself switching to fashion design and later started her business with the custom-made fashion brand “Kilomet 109.”

Thao now owns a tailoring workshop and a showroom in Hanoi.

The woman also does the design and creates custom-made items for a handful of fashion brands based in London, Paris, and Berlin.

Thao shared how she first tried her hand at fashion design.

Some years ago, Thao’s elder sister, who lives in Germany, asked her to make a number of traditional Vietnamese clothing items.

To start with, Thao simply based her designs on her sister’s taste.

“Beyond my wildest imagination, my sister’s friends showed profuse interest in my designs and the fabric I chose for her,” she said.

As orders for such custom-made designs began to soar, Thao grabbed the opportunity to augment her meager income while looking for a teaching job vacancy.

As another twist of fate, the young woman passed an exam to get into the Hanoi-based London College for Fashion Studies.

She graduated in 2008 and worked as a lecturer there. During that time, Thao also worked for Victoria Roe, a Hanoi-based fashion label created by British designer Victoria Roe.

In 2010, she tried her hand as a designer and quality manager at the Hanoi branch of A.D.Deertz, a Berlin-based casual menswear brand that specializes in modern classics.

“Working at fashion companies for five years has enriched my expertise in the fashion industry. However, I realized that I would not have my own experiences unless I run my own business,” Thao said.

The enterprising woman then came up with her “Kilomet 109” brand.

The brand name is indicative of the distance between Thao’s hometown – the northern province of Thai Binh –and Hanoi.

Kilomet is the Vietnamese transcription of kilometer.

The name is also suggestive of her willingness to always be on the move.

To stand out from countless designers, Thao focuses on fine quality and ecological friendliness by tapping the bountiful botanical reserves in the country’s mountainous areas.

Since her college years, she has been infatuated with the traditional attire donned by Nung ethnic minority people, who inhabit the country’s northwestern region.

She later chanced upon a Nung woman at a craft fair held in Hanoi.

Thao was intrigued by how these ethnic people ferment herbs to produce their ecologically-, user-friendly dyes.

She has since maintained a close liaison with the ethnic people in such northern mountainous provinces as Cao Bang and Hoa Binh for a stable supply of fabrics and dyes.

In 2014, Thao won the Young Creative Entrepreneur (YCE) program launched by the British Council in Vietnam, which was meant to honor inspirational business owners and connect them with international opportunities.

The YCE jury highly appreciated Thao’s project as her products are associated with traditional weaving and dying techniques, ecologically-friendly materials, and her strong corporate commitment to working with ethnic minority women.

Thao’s products, which fetch at least US$1,000 apiece, are always in good demand.

She has put her products on sale at A.D.Deertz and Tortrase fashion shops in Berlin.

These shops are situated on streets frequented by locals and tourists, who make up Thao’s potential clientele for highly aesthetic, long-lasting custom-made designs instead of less meticulous mass products.

These are the European fashion boulevards that the woman has strongly aspired to conquer.

“Vietnam’s market for custom designs is diverse, but it lags far behind those in other countries regarding popularity, partly because most consumers still find designers’ tastes quite alien,” Thao noted.

The woman has organized a large number of fashion exhibitions and events in Hanoi.

The most recent involved her collection of scarves, which is inspired by the interlaced electric wiring in the capital’s streets.