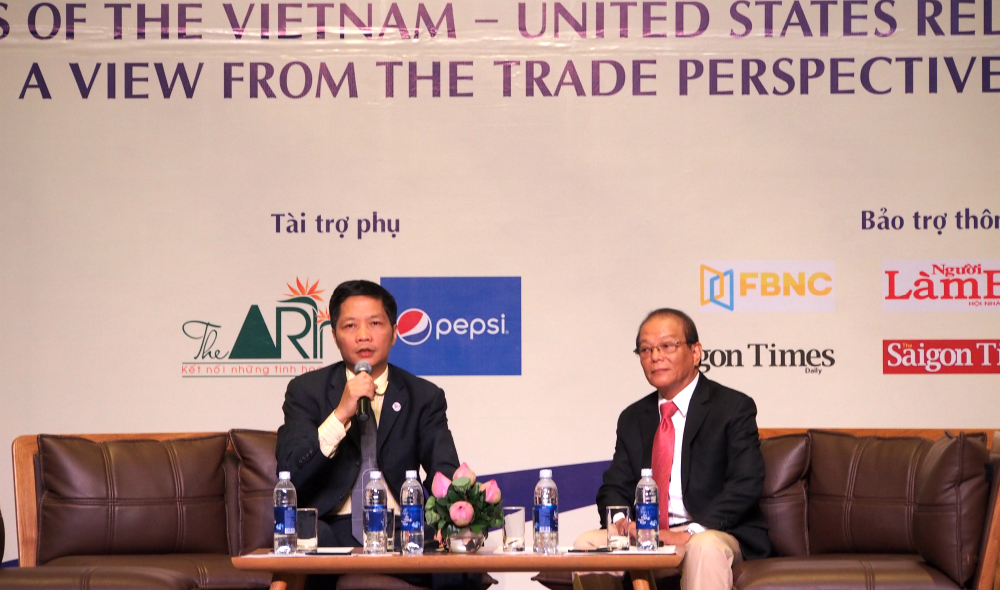 Vietnamese enterprises should look beyond TPP when doing business with US partners: pundits

Pure numbers like growth rates in exports and revenues are crucial in economic relations between Vietnamese and U.S. businesses, but the opportunities to learn new skills and new technologies applicable to production and management from American partners are more important, local experts said at a recent workshop.

The 400-million-strong U.S. market, the one that almost every country wants to export their goods to, plays such a crucial role in today’s world due not only to its size, but also to the technologies and working styles the American economy possesses, pundits said at the "20 Years of Vietnam-U.S. Relationship: A View from the Trade Perspective" workshop in Ho Chi Minh City on July 31.

More importantly, the two economies, located on opposite sides of the Pacific Ocean, may go hand in hand along with the ten remaining economies when the Trans-Pacific Partnership (TPP) trade agreement is signed.

The TPP is a proposed regional free trade pact aimed at eliminating tariffs and lowering non-tariff barriers that is being negotiated by 12 countries throughout the Asia-Pacific region.

The countries include Australia, Brunei, Canada, Chile, Japan, Malaysia, Mexico, New Zealand, Peru, Singapore, the United States and Vietnam, which collectively contribute almost half of global output and over 40 percent of world trade.

Economic and trade relations between Vietnam and the U.S. will reach a new stage of development in many fields when the TPP is realized, the experts said.

Rena Bitter, U.S. Consul General in Ho Chi Minh City, said that 20 years ago no one would have thought about what the two countries have achieved economically today.

The trade numbers will continue to soar, possibly at a faster pace, when the TPP is concluded, as it will create a new area covering 40 percent of global trade, Consul General Bitter added.

After 20 years of normalized relations between Vietnam and the U.S., currently the highlight which is most-mentioned is probably the TPP, said Tran Tuan Anh, Deputy Minister of Industry and Trade and deputy chief of the Central Economic Commission.

The TPP is the prototype of a diversified and deepening cooperative relationship toward a market economy and free trade, Anh said.

With the TPP, Vietnam-U.S. economic relations will be raised to a new level, he added.

Three years later the two nations signed new bilateral trade pacts to pave the way for Vietnam to enter the World Trade Organization, with 10,000 import duty lines to be cut, including that levied on garment and textile products.

If the TPP pact is signed and implemented, Vietnam’s exports to the U.S. will likely rise to $50-60 billion annually, Tu added.

Improvement has not only been seen in trade, but also in the investment inflow to Vietnam, which surged from $126 million in 2000 to $11 billion in 2013, he added.

If the TPP is adopted, the key export sectors of Vietnam, such as garment-textile, footwear, furniture and electronics, will all benefit when tariff barriers for those items are reduced to zero percent.

In some industries, Vietnamese shipments to the U.S. are just behind China, so when the TPP is clinched, Vietnamese enterprises will have the opportunity to improve the competitiveness of their goods there.

Le Quoc An, chairman of the advisory board of the Vietnam Textile and Apparel Association, said besides the benefits from tax reduction, worth around $1.7 billion annually, the market share of Vietnamese garment and textile items in the U.S., which currently stands at 10 percent, may have a chance to double in the next decade.

In the last ten years, Vietnamese garment and textile products exported to the U.S. have grown 398 percent in value and enjoyed an average growth rate of 15 percent per year.

In 2014, China's textile and apparel shipments to the U.S. amounted to $42 billion, making up a 37 percent market share.

So when the TPP is signed, the gap between Vietnam and China in the U.S. market will be narrowed.

But what is more important, according to An, is the improvement of the capability of Vietnamese garment and textile producers in the world’s value-added chain.

About fifty percent of the value added Vietnam earned while exporting $24 billion dollars worth of textiles and clothes globally last year came from the U.S. market, he elaborated.

As most Vietnamese exporters have begun to work directly with American retailers or through only one or two intermediaries, the value added for the local garment and textile industry has increasingly improved, An said.

Many important human resources working in the textile industry have been trained in the U.S., which is among the largest benefits Vietnam has reaped when doing business with them, An added.

Regarding education and training, in 1995 only 800 Vietnamese students studied or conducted research in the U.S.

Today that number has surged to over 17,000, helping Vietnamese rank eighth among the community of foreign students studying in the North American country, said Tran Tuan Anh, Deputy Minister of Industry and Trade.