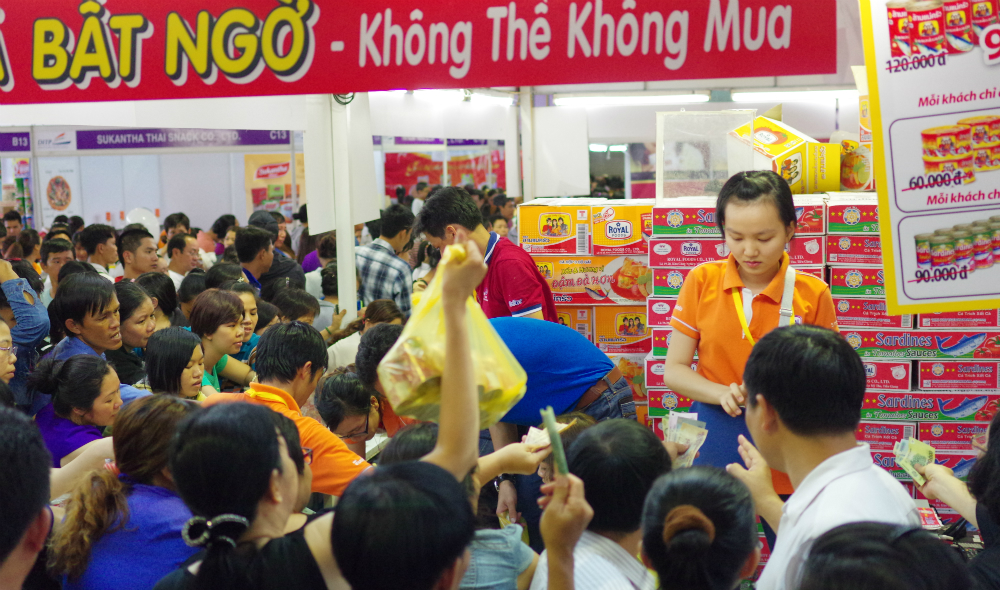 It was 10:00 pm on August 9, and the atmosphere at the Tan Binh Exhibition and Convention Center in Tan Binh District, Ho Chi Minh City, was still bustling, as local customers were busy packaging goods they had bought from an exhibition of Thai goods there to bring them home.

They filled up the two parking areas, with a total capacity of nearly a thousand motorbikes, with piles of a variety of Thai-made products, from dishwashing, household items and detergents, to clothing and footwear, waiting to be loaded onto the motorbikes.

While waiting for a family member to take his motorbike from the parking lot, Bui Minh Hoa from Go Vap District told Tuoi Tre (Youth) newspaper that this was the second time she had gone shopping at a Thai goods fair.

"The prices vary, with some higher and some lower than Vietnamese goods in a similar segment, but I feel assured of the quality, especially processed food," she said, adding that her neighbors told her about the event.

Besides housewives, the trade expo also attracted a large number of young people. A group of high school students excitedly brought back home many Thai products like pullovers, shoes, bracelets and cosmetics after strolling around the place for many hours.

"Though Thai goods are not much cheaper and do not have much better quality than their Vietnamese counterparts, they have many more unique designs. In the past, we often visited Thailand to look for these kinds of products, but now, as more trade fairs showcasing Thai goods are held, we don’t need to do so anymore,” Minh Huy, a student from Nguyen Thuong Hien High School in Tan Binh, told Tuoi Tre.

A representative of the organizer of the trade fair, Sao Quang Minh Company, said the number of local customers visiting it, held three times annually, is increasing.

Another representative of the National Trade Fair and Advertising Joint Stock Company (VINEXAD) under the Ministry of Industry and Trade said exhibitions of Thai goods organized by this firm in Ho Chi Minh City, Hanoi and Hai Phong, three of the biggest cities of Vietnam, always attract huge numbers of visitors without needing many promotional programs.

"We also have visitors from neighboring localities like Tay Ninh, Long An and Tien Giang attend the fairs to buy goods for consumption or reselling, not to mention Vietnamese firms seeking business opportunities to work as distributors," he added.

A gloomy picture for Vietnamese products

Many Vietnamese exhibition organizers said that while more and more people are flocking to Thai trade fairs, the number of local visitors to exhibitions of Vietnamese goods is steadily declining, as many vendors there sell goods of dubious origin, mostly from China, and poor quality.

“In the past, I was very eager to go to the Vietnamese fair because I always thought it’s an opportunity to buy genuine Vietnamese goods at soft prices, as businesses would take advantage of the occasion to promote their products,” Le Thanh from Tan Binh told Tuoi Tre.

“But when I arrived there, I was disappointed at the goods on display, as most of them were Chinese with their origin carefully hidden, and were more expensive than those available on the market,” she added.

Even some local producers told Tuoi Tre they do not want to take part in such trade fairs as many only focus on how to bargain away their low-quality unsold stocks.

Thai products – including consumer goods, food and electronics – are starting to penetrate deeper into the domestic market to expand their share, not only through trade fairs but also through other distribution channels like markets, grocery stores and convenience stores, an expert told Tuoi Tre.

The home market of Vietnamese goods is being taken over by Thai rivals as the import tariffs levied on them will be reduced to zero percent following the creation of the ASEAN Economic Community, which is scheduled to form by the end of this year, he added.

Goods will flow freely among the countries in the community then, as agreed by the ASEAN member states.

The Association of Southeast Asian Nations (ASEAN) is a ten-member bloc which includes such Southeast Asian countries as Indonesia, Malaysia, the Philippines, Singapore, Thailand, Brunei, Cambodia, Laos, Myanmar and Vietnam.

The government of Thailand has outlined a strategy to penetrate the Vietnamese market, Usa Wijarurn, commercial counselor of the Thailand Chamber of Commerce in Hanoi, told local reporters at Thailand Week 2015, an exhibition of Thai products in the capital city, on August 13.

In particular, the organization of trade fairs to connect Thai manufacturing enterprises and Vietnamese consumers is being strongly promoted in Vietnam, Usa said.

"What we gain from these activities is the potential of Vietnam's retail market, with demand from nearly 90 million people, of which the majority are young people,” she said.

In the first half of 2015, bilateral trade turnover of the two countries reached $5.4 billion, up nearly $1 billion over the same period of 2014, Usa said.

The two governments have agreed on the goal of taking their trade to $20 billion in 2020, she added.