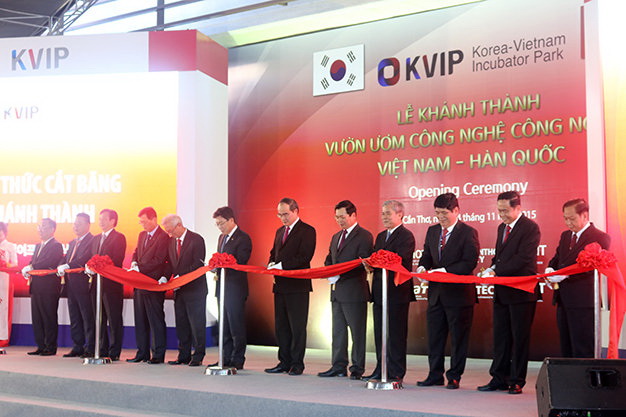 A facility meant to harness the agricultural and industrial potential and personnel of Can Tho City in the Mekong Delta has been inaugurated.

The facility is part of a framework partnership between South Korea and Vietnam regarding industrial, agricultural and technological capacities.

Spanning 13,000 square meters, the two-block complex is armed with modern devices designed for the research and development of the city’s three major sectors, namely produce processing, aquaculture and mechanical engineering.

The total investment in the KVIP is US$21.13 million, in which South Korea’s official development assistance accounts for $17.7 million, with the remainder coming from the Vietnamese government.

The incubator park is capable of accommodating 40 foreign and local businesses specializing in agriculture, aquaculture, and mechanical engineering.

Two qualified Vietnamese enterprises and another from South Korea have been offered entry into the incubator park.

Vo Thanh Thong, head of the Can Tho People’s Committee, said that the establishment of the incubator park is to boost research, manufacturing, and foreign investment, particularly from South Korean businesses.

President of the Vietnam Fatherland Front Central Committee Nguyen Thien Nhan (center) and other delegates look at a piece of machinery at the newly-opened the Korea-Vietnam Incubator Park. Photo: Tuoi Tre

“The park promises to be an appealing corporate destination. Firms basing their factories there will benefit from a number of auspicious policies regarding product and technology development, as well as land and tax-related incentives,” Thong noted.

“The municipal administration has made a commitment to provide the companies with the best possible conditions,” he stressed.

Yoon pointed out that Korean firms are keenly interested in Vietnam, and Can Tho City in particular.

The avid interest is manifest in the set-up of Lotte supermarkets in the city.

The Korean minister added that 20 Korean companies are currently lining up for a spot at the incubator park.

That number will rise in the future, he noted.