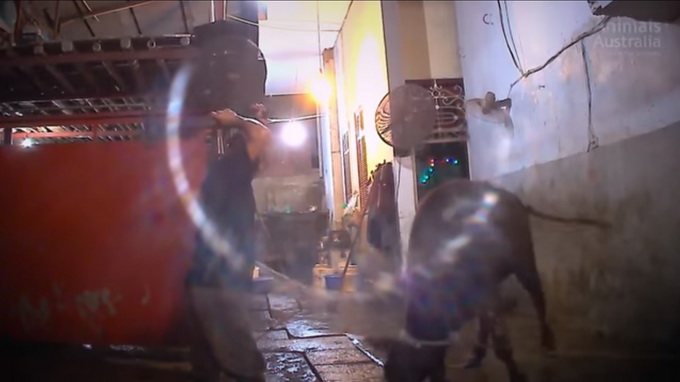 Australian livestock exporters will take more measures to monitor the treatment of its shipments to Vietnam after allegations were made last week against the inhumane slaughter of cows with sledgehammers in Vietnamese abattoirs.

The news came five days after the council made its first announcement about tightened livestock exports to Vietnam in response to allegations made by Animals Australia about animal cruelty toward Australian livestock shipped to the Southeast Asian country.

Footage of cows being slaughtered with a sledgehammer in a Vietnamese abattoir was aired in a documentary on Australia-based ABC News last Thursday and shared by Animals Australia on their Facebook page.

“I watched the sledgehammer footage again last night as part of the 7.30 Report story,” ALEC CEO Penfold was quoted in the statement last Friday. “No amount of times watching those animals suffer will lessen how sick and disgusting it is and makes me feel.”

“Although we exported more than 300,000 cattle last year to Vietnam, it is individual facility failures which we must address if our industry is going to have any chance of regaining public confidence in live export trade to Vietnam,” the executive added.

The list of additional measures to be taken by ALEC includes immediate suspension of supply to any approved Vietnam feedlot or abattoir under investigation and a permanent ban on the supply of cattle to any approved facility in Vietnam found in critical breach of Australian regulations.

Many Vietnamese importers of Australian cows asserted, however, that the Vietnamese beef market would not be greatly impacted by the sanction or see any major change in prices.

According to Truong Thi Dong, director of Trung Dong Co. Ltd. in Dong Nai Province, the new ban only applies to some small-scale slaughterhouses in northern Vietnam, while southern Vietnamese importers are still left unaffected.

Bach Duc Luu, director of the Animal Health Authority of the Sixth Division under Vietnam’s Department of Animal Health, said Australian authorities had not announced officially the list of slaughterhouses under investigation in the Asian country.

Luu added that as for the moment only abattoirs in northern Vietnam that were found violating slaughter or animal welfare regulations by the Exporter Supply Chain Assurance System (ESCAS) would be affected by the ban.

This is the second time that Vietnamese importers have faced scandals surrounding inhumane treatment of livestock imported from Australia.

In 2015, similar allegations about animal cruelty in Vietnamese slaughterhouses were leveled by Animals Australia, though no ban on livestock export was imposed by the Australian government afterwards.

Vietnam is currently Australia’s second-largest and fastest-growing livestock importer, purchasing over 300,000 cattle from January to November 2015, a 71-percent increase from the previous year’s figures, according to statistics published by ALEC.