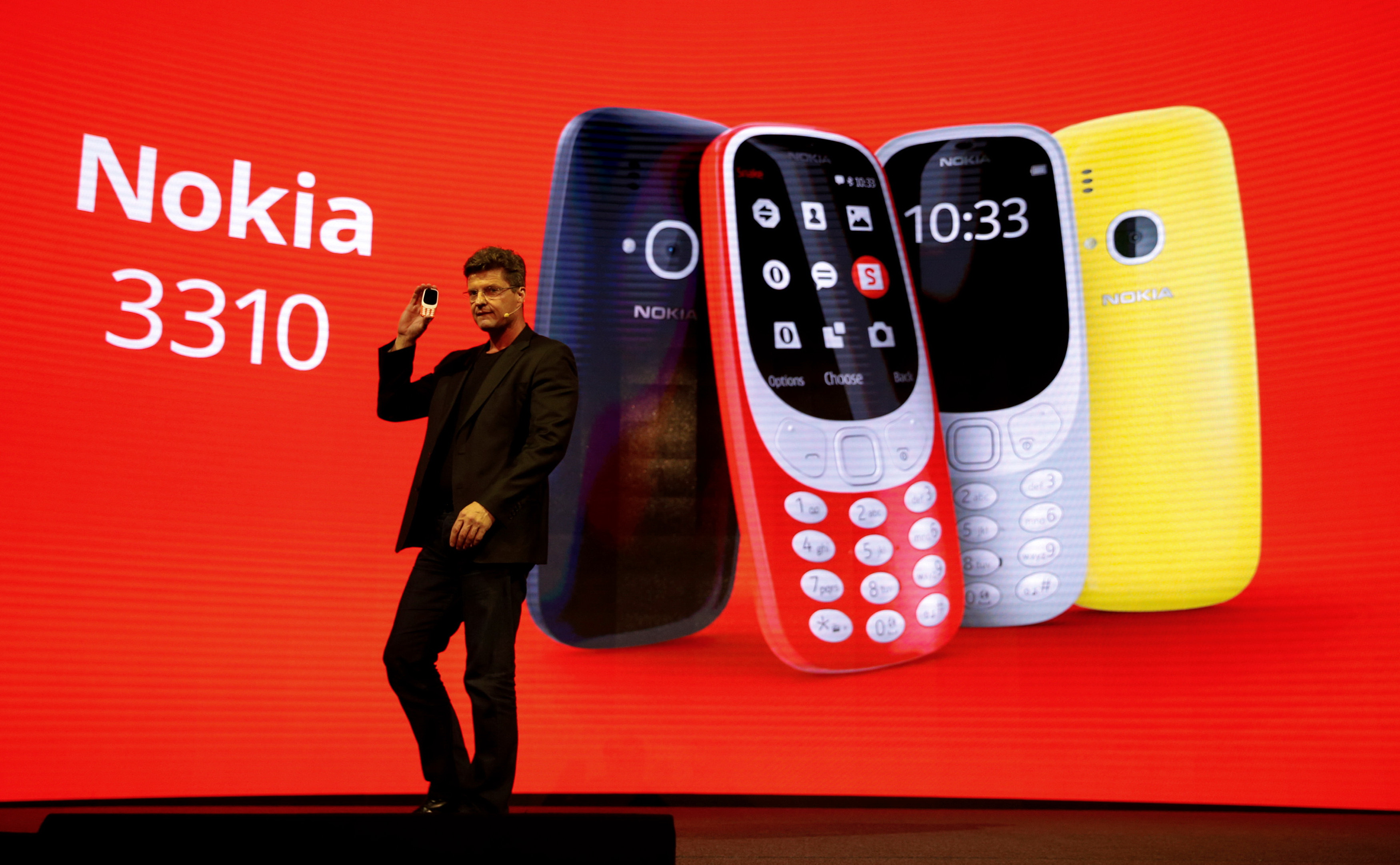 Nokia goes back to the future with 49 euro phone

Nokia's newly revitalized phone business went back to the future on Sunday, re-introducing a brightly colored version of the classic 3310 talk and text phone, the world's most popular device in the year 2000.

The new model has bigger screens and is priced at just 49 euros ($52). Its 22 hours of talk time and up to one month of standby time potentially heighten the phone's appeal as a backup for smartphone users.

Analysts hailed the 3310 launch as a smart retro gambit, but one which could overshadow the Finnish company's re-entry into the global smartphone market. Nokia also launched four moderately priced smartphones ranging from 139 to 299 euros.

"The love for the brand is immense. It gets a lot of affection from millions and millions of people," Nokia Chief Executive Rajeev Suri told a news conference at Mobile World Congress in Barcelona, the telecom industry's largest annual trade fair.

Once the world's dominant phonemaker, Nokia in 2014 sold its by-then ailing handset operations to Microsoft for $7 billion, leaving it with its network equipment business and a large patent portfolio.

But last year, it gave the Nokia brand a fresh start by licensing its devices brand to HMD Global, a new company led by ex-Nokia executives and backed by Chinese electronics giant Foxconn.

Industry analysts say the revived Nokia 3310 has the makings of one of the hit devices of 2017, appealing to older Nokia fans in developed markets looking for an antidote to smartphone overload, while also appealing to younger crowds in emerging markets.

"HMD owns a retro hit and is surfing on the 'vintage' hype to re-create buzz around the Nokia brand," said Thomas Husson, consumer devices analyst at Forrester Research.

The original 3310 sold 126 million phones, the 12th best-selling phone model in history. Nine of the top 12 selling models were produced by Nokia.

It also revives the one-time hit time waster game Snake featured on the original phone, the "Angry Birds" of its day. In a modern twist, fans can now play Snake in Facebook Messenger.

It also offered a limited edition of the Nokia 6 with added features retailing for around 299 euros.

HMD appears to be in two minds as to how to market the 3310, believing on the one hand it has a blockbuster product revival, while possibly drowning out Nokia's future-focused smartphone strategy.

"Our focus and future is in Android smart phones," HMD Chief Executive Arto Nummela said in an interview with while refusing to rule out dipping into Nokia's back catalog of popular feature phones.

Under its licensing deal, HMD has sole use of the Nokia brand on all phones and tablets for the next decade. It will pay Nokia royalties for the brand and patents, but Nokia has no direct investment in HMD.

While for many consumers in developed economies Nokia has disappeared as a phone brand in recent years, it remains popular in many emerging markets. There, Nokia has a reputation for delivering user-friendly feature phones at competitive prices, said Neil Mawston, an analyst with industry research firm Strategy Analytics.

Feature phones accounted for a one in five of the 1.88 billion mobile phones shipped in 2016. Samsung Electronics captured a 13 percent share of the feature phone business and Nokia, No. 2 in feature phones, shipped 9 percent, according to the market research firm's data.

Ahmad Badr, strategy director for brand consulting firm Siegel+Gale, said the 3310 is a powerful reminder of Nokia’s historic popularity but also could limit the company's appeal beyond its short-term nostalgia spike.

“Relying on the success of the 3310 helps it grab the attention of many people who are familiar with Nokia but think it is dead,” Badr said in an interview.

“To Nokia, that nostalgia and heritage is not something to hide from, but only if they can create momentum for it.”