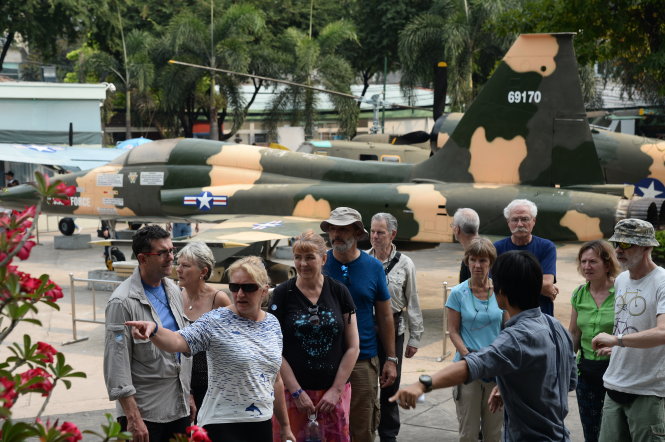 The southern tourism hub received 5.2 million foreign holidaymakers in 2016 and experienced a 15 percent jump in tourist numbers during Q1 2017, though experts are still unsure the city will meet such a lofty goal.

In the Jan-Mar period, more than 1.5 million international visitors spent holidays in Ho Chi Minh City, but Bui Ta Hoang Vu, director of the municipal tourism department, said the quarterly growth must be more than 20 percent for the seven-million target to be met.

Industry insiders said at Thursday’s meeting that the city still lacks unique tourism products that attract longer visit and return trips, a problem that can only be solved through close cooperation between authorities and businesses.

Nguyen Thi Khanh, deputy chairwoman of the city’s travel association, said the attractiveness of a destination can be measured by how long visitors are willing to stay.

“The reality is that travel firms in Ho Chi Minh City are still struggling to persuade guests to stay for even just three days,” Khanh said, adding that many tourists “wanted to leave after their first day here.”

“We only give tourists what we have and pay little attention on what they really need,” Long said.

He suggested consulting foreign experts to know what European or Asian holidaymakers expect from Ho Chi Minh City, and to “compare those expectations with what we already have in order to find a solution to the problem.”

While industry insiders agree that Ho Chi Minh City needs a game-changing product such as popularizing Meetings, Incentives, Conferences, and Events (MICE) tourism to the metropolis, they also admit that local resources and infrastructure are not yet ready for this kind of tourism.

“It is not easy to receive more than 1,000 visitors at a time,” Tao Van Nghe, chairman of the city’s hotel association, admitted.

“First we have to have a sufficient supply of five-star hotel rooms and accomplish other demanding logistic tasks.”

MICE is a type of tourism in which large groups, usually planned well in advance, are brought together for a particular purpose.

Khanh, of the municipal travel association, also said she was recently consulted by a tourism agency for her opinion on whether or not the city can accommodate a MICE event for 3,000 people in 2019.

“I told the travel company to think about it carefully as it will be a complicated program that involves thousands of tasks and lots of paperwork,” she said, “not to mention, a travel firm in Ho Chi Minh City is only able to serve 800 customers at a time.”

Upon hearing from local travel firms, Tran Vinh Tuyen, deputy chairman of the municipal administration, said the city is rebuilding its tourism strategy to “develop Ho Chi Minh City tourism to its potential.”

Under the new strategy, Ho Chi Minh City will hold at least two events a month and create more must-visit attractions, such as the culinary street or town of traditional medicine stores.

The city’s chairman Nguyen Thanh Phong called on all forces to stay creative and contribute in the effort to welcome the targeted number of international arrivals.

Phong demanded that regulatory bodies prepare a new tourism development strategy for the city from now to 2030 and report the plan to the municipal administration by September this year.

“Ho Chi Minh City is willing to solicit feedback from international tourists and foreign experts to identify breakthrough solutions that will help realize our goal of making tourism its core economic sector,” the chairman asserted.