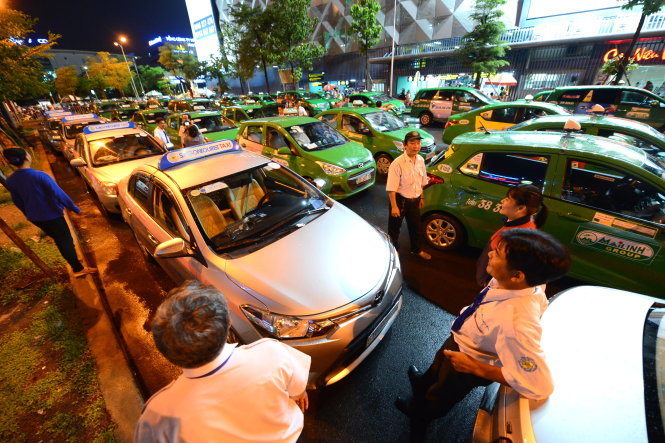 Conventional taxi operators in Vietnam’s big cities might believe that bus stations and airports are their final stronghold in the battle against tech-based rivals Grab and Uber. Unfortunately these old-school cab firms do not seem to realize something everyone else does: they’re wrong.

Increasing numbers of road and air passengers are now booking Uber or Grab through their smartphones within minutes of their arrival, leaving traditional taxi drivers scrapping for fares.

Before taxis can pick up passengers at airports, they must queue in long lines, a process that can last up to two hours.

Traditional taxis also face an uphill battle when it comes to pricing.

In Hanoi, the situation is no different.

A ride from the Noi Bai International Airport to the capital’s center by traditional taxi normally costs VND350,000 ($15.5) compared to the much more preferable price of VND250,000 ($11) offered by Uber.

Taxi operators are looking at ways to cut costs and remain competitive against tech-based services.

Some companies are even looking at entirely new business models, though their decisions are seen mainly as a move to pass heavier burdens onto the shoulders of their drivers by eliminating contracts and forcing the cabbies to lease cars from the operators.

This business model spares cab operators from covering insurance and other expenses for the drivers. In return, drivers can work on their own schedules and negotiate ride fares with customers, so long as they pay a daily car leasing fee of VND670,000 ($30) to VND800,000 ($35) to the taxi firms.

Nguyen Van T., a Vinasun driver, switched to the new model and is not happy with the change.

“I lost all my allowances, like insurance and supporting fees, which are important to drivers given the permanent risks on the street,” he said.

According to other drivers, the car-leasing model does both good and harm.

“I can now cut prices by 20-30 percent compared to the rates suggested by the company,” one Vinasun driver named Tuan said.

This is particularly effective when taking long-haul fares, he added.

Others are agitated by the high daily fee they must pay the cab operators. Under the new scheme, drivers may take fewer days off because not working means losing at least VND670,000 for no reason.

“This will put more exhausted drivers on the streets, which is a real risk,” some cabbies said.

One driver, N.V. Son, admitted that he turns to caffeine whenever he feels drowsy behind the wheel.

“No one wants misfortune on the street,” he said.

“But if it happens, you can only blame your fate.”