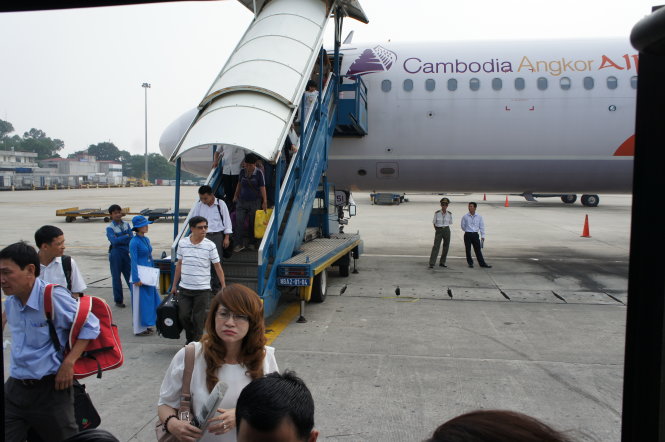 Wet leasing may be a common practice amongst airlines, but it remains unpleasant to some Vietnamese flyers, especially when they are not informed of the arrangement before flying.

A ‘wet lease’ refers to a short-term leasing arrangement whereby one airline provides an aircraft, a complete crew, maintenance, and insurance for another carrier.

The opposite mechanism, dry lease, works in the longer term, with the aircraft leased without a crew or staff.

All major Vietnamese carriers have confirmed to Tuoi Tre (Youth) newspaper that they have at some point launched services using the aircraft and crew members of other airlines.

The practice is totally legitimate; however, passengers are often kept in the dark about the arrangement.

Buying a ticket from Airline A only to be asked to board the plane of Airline B is something passengers can rightfully feel uncomfortable with.

The unease may also be accompanied by anger and fear, especially when the wet-leased aircraft is old and belongs to lesser-developed airline, as some flyers have complained to Tuoi Tre.

Upon arrival, Thuyet was stunned to see the plane she was about to board was not a Vietjet aircraft, but one bearing the Myanmar Airways logo.

The passenger then asked a ground service attendant and was told that the Myanmar Airways aircraft was being wet-leased to Vietjet.

Upon reaching her seat, Thuyet found iron bars exposed beneath her chair that were not fully coated.

She called the chief flight attendant, who was Myanamarese, to complain, but the dialogue was unsuccessful given the language barrier.

The passenger subsequently requested to change flights without an additional cost, but the request was rejected.

A Vietjet representative later confirmed to Tuoi Tre that Thuyet’s account of what happened on her flight was accurate.

The representative explained that Vietjet had wet-leased the Myanmar Airways aircraft to meet rising demand during the summer, admitting that the aircraft would always carry a Myanmarese cabin crew.

He added that Thuyet had refused an offer to change her seat, causing the Ho Chi Minh City-Thanh Hoa flight to be delayed for 45 minutes.

She was later asked to leave the aircraft to talk to the Southern Airports Authority, and eventually accepted a refund for her ticket, according to the Vietjet source.

Many other Vietnamese passengers have complained that they find it uneasy to travel with a plane operated by an airline different from the one they have trusted and chosen to fly with.

They feel uncomfortable when flying domestically with foreign attendants.

Some are concerned about the flight quality and even safety, as most of the wet-leased planes appear old.

“I can tell only by looking around that the Myanmar Airways plane is much older than Vietjet’s,” Pham T., another Ho Chi Minh City passenger who once traveled on a wet-leased aircraft, told Tuoi Tre.

“This didn’t mean that I didn’t trust Myanmar Airways, but I could not help but feel nervous for the entire flight.”

Tran Thanh T., a Hanoi resident, once bought a Vietnam Airlines ticket and was asked to board a Cambodia Angkor Air plane.

“I felt uneasy as to why they had to wet-lease from such a lesser-known airline?” he said.

“Vietnamese airlines should choose to lease aircraft from popular airlines so their passengers feel safer than traveling on an unfamiliar plane.”

“Passengers will think that airlines are trying to increase profits by leasing cheap airplanes to offer more services during peak seasons.”

Flyers should be informed in advance

A Vietjet representative confirmed that the budget carrier is wet-leasing three planes, one from Bulgaria’s BH Air and two from Myanmar Airways, for the next two or three months.

“The wet-lease contract is much costlier than dry lease and the quality of the airplanes is all certified by the Civil Aviation Authority of Vietnam,” the representative reassured.

A Jetstar representative said the carrier once wet-leased airplanes from a Spanish carrier but “has yet to make any similar arrangement this summer.”

The Jetstar spokesperson said the quality of the flight on wet-leased aircraft is always ensured. “The difference, if any, is whether the [Vietnamese] carriers are willing to lease new planes or not,” he said.

National flag carrier Vietnam Airlines has confirmed it is offering services with one aircraft wet-leased from Cambodia Angkor Air from now until the end of this year.

Vo Huy Cuong, deputy head of the Civil Aviation Authority of Vietnam, said it is normal practice for airlines to wet-lease aircraft and the quality of the planes in question is carefully vetted by the country’s aviation watchdog.

Cuong added, however, that airlines must inform passengers beforehand that they are going to fly in a wet-leased plane.