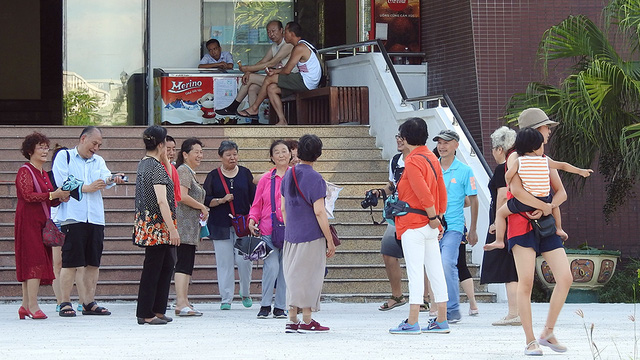 Many Chinese nationals are illegally working as tour guides for their compatriot tourists in the central Vietnamese city of Da Nang, stealing jobs from local people, while the municipal tourism department says it is a tough problem to solve.

A group of Vietnamese tour guides, who speak Chinese, have complained that the unlicensed guides are working openly and severely affecting the tourism environment of Da Nang.

Thanh, one of the local Chinese-speaking tour guide, said most of the tourist groups from China, particularly those on budget packages, will be taken around Da Nang by a Chinese national.

The licensed Vietnamese tour guides will be hired as ‘sitting guide’ – who will keep silent throughout the tour and only show up to work with authorities when needed. The Chinese will be in charge of the introduction and assistance to the tourists.

Tran Chi Cuong, deputy director of the Da Nang tourism department, admitted to Tuoi Tre (Youth) newspaper that some Chinese tour guides are working in the city without a permit.

When they are detected by authorities, the Chinese will leave the tourists and the local ‘sitting guides’ have to work with officials and pay the fine. The local ‘scapegoats’ will later be refunded by the Chinese.

Cuong said there are now more than 400 Chinese-speaking tour guides in Da Nang, sufficient to meet demand so “the unlicensed Chinese tour guides are taking away incomes of the Vietnamese guides.”

However, the deputy department head added that it is not easy to handle those illegal tour guides as they have “sophisticated methods to dodge detection and are sometimes abetted by the Vietnamese travel firms or tour guides.”

Cuong said it is difficult to have proof, in the forms of photo or footage, to punish the unlicensed Chinese tour guides.

“The tourism inspectors are not allowed to stop a tourist bus for check, so it is really a challenge to curb the phenomenon,” he said.