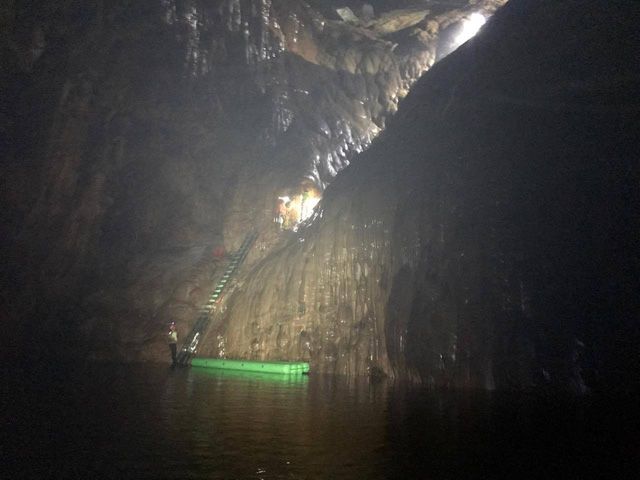 Quang Binh authorities have finally approved a plan to install a ladder inside the north-central province’s famous Son Doong Cave, allowing tourists to explore through out the world’s biggest natural cave instead of returning to exit after reaching its end.

The Quang Binh administration has green-lighted the ‘ladder solution’ despite widely objections that it may destroy the stalactites that are millions of years old inside Son Doong.

Son Doong Cave, located in the heart of the Phong Nha-Ke Bang National Park in Quang Binh, became internationally known after a group of cavers from the British Cave Research Association conducted a survey of the area in April 2009. The cave has since become known as the largest cave passage cross-section in the world, according to National Geographic.

At the end of the Son Doong passage stands the 90 meter tall ‘Vietnamese Wall,’ made of millions-years-old stalactites. Behind the wall is a 600-meter passage leading to the rear entrance of the cave.

As part of the current cave exploration tour, offered by Quang Binh-based Oxalis, explorers must return to be able to exit the cave through its entrance after reaching the ‘Vietnamese Wall.’

The tour operator has thus proposed building a ladder to help tourists climb over the stalactite wall and leave the cave through the rear entrance.

Even though the proposed ladder has been met with public objection in that it may affect the natural stalactites believed to be formed over millions of years inside the cave, the proposal was eventually approved by the Quang Binh administration.

Oxalis has been allowed to take tourists through Son Doong from entrance to exit from 2018.

The administration, however, required that the tour operator ensure the ladder installation and usage will not leave any environmental impact or destroy the stalactites.

The decision came after the Quang Binh environment department submitted an assessment report, claiming that the ladder may affect the geological process inside the cave, but the impact is insignificant.

The new tour, allowing tourists to go through the cave, will take four days and three nights, one day-night period shorter than the current package, according to Oxalis.

The company has tested the new tour from May 21 to August 31, with nine different groups including a total of 188 tourists successfully going through Son Doong.

Oxalis said the ladder solution was initially recommended by British Cave Research Association and its location had been carefully selected to leave the smallest possible impact on the cave environment and its stalactites.

Tourists will feel more relaxed with the new tour as the journey will be shorter.

The ladder will also help shorten the time to leave the cave in case of accident to two hours from the current six hours.

It will also be of great use in the event of flood, when tourists can climb over the ladder and leave the case immediately, instead of having to wait up to four days until the floodwater recedes, according to Oxalis.