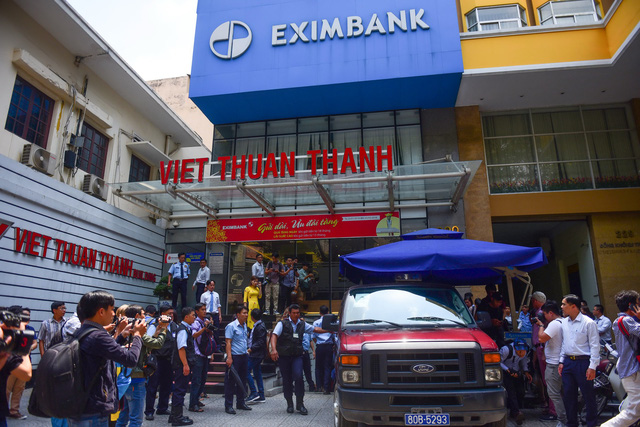 Vietnamese police on Monday arrested two employees of local lender Eximbank for their role in helping a wanted former leader steal more than US$10 million from multiple savings accounts of a ‘VIP’ depositor.

Ho Ngoc Thuy and Nguyen Thi Thi, who both work in the customer office of Eximbank’s Ho Chi Minh City branch, had their cubicles searched before being detained on an arrest warrant.

Eximbank admitted in February that Hung is on the run overseas after a wanted notice was issued for him in December 2017.

According to police investigation, Hung forged papers which stated that Binh authorized Nguyen Thi Hong Le, his wife's aunt, to withdraw money from the savings books on her behalf.

The fugitive banker managed to have Binh sign those papers in advance, and himself faked Le's signature.

Thuy and Thi, as part of their work, were asked to confirm that those letters were authentic.

“They confirmed those papers in the absence of both Binh and Le," Ngo Thanh Tung, a member of the Eximbank board of directors, told Tuoi Tre (Youth) newspaper, explaining why they were put under police investigation.

Tung underlined that the arrested employees were forced to “make such a technical mistake” by Hung, who gave them the documents along with another forged paper showing that Binh had agreed to have her money withdrawn.

“[Thuy and Thi] paid the price and had to deal with the law only because of an avoidable mistake,” Tung commented.

As Binh demanded that Eximbank pay her back all of the money stolen by Hung, the lender at first said it would take no action pending the final ruling of a court.

Binh said while the money should be treated as part of the VND245 billion sum, Eximbank described it as a form of financial support for her during these tough times, making no mention of her fortune having vanished.

A series of scandals

Chu Thi Binh is not the only Eximbank depositor who has had their money ‘disappear' without their knowledge.

Earlier this month, six customers of a transaction office of Eximbank in the north-central province of Nghe An complained that their savings, collectively worth VND50 billion ($2.2 million), had been gone mysteriously.

One of them, Nguyen Tien Nam, opened 13 savings accounts at the transaction office with a total deposit of more than VND28 billion ($1.23 million).

In August 2016, an Eximbank Nghe An banker named Nguyen Thi Lam turned herself to police officers, saying she had swindled the lender’s customers and appropriated their assets.

Upon learning of the news, Nam came to Eximbank to check his savings and was shocked to see that only VND196 million ($8,620) was left in the accounts.

Eximbank Nghe An offered to give him VND1.55 billion ($68,200) as ‘temporary support’ in the same manner as the case of Binh, but Nam turned the bank down.

Nguyen Hoang Minh, deputy governor of the Ho Chi Minh City branch of the State Bank of Vietnam, said he has requested Eximbank to make a full report on the recent series of money-loss scandals within its network.

The State Bank of Vietnam has demanded that Eximbank tighten its procedures and internal regulations to minimize risks for the lender itself and its customers, Minh said.

“Eximbank has been asked to review its protocols on accepting savings and giving loans to avoid issues stemming from the ethics of its bankers,” he added.