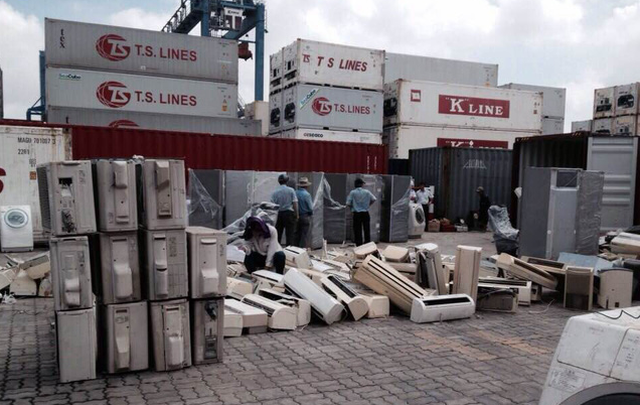 An increasingly larger quantity of imported scrap has overloaded several seaports in Ho Chi Minh City, which has become an ‘alternative destination’ for the waste dumping after China ceased buying it earlier this year.

Within the first two weeks of May alone, 7,000 twenty-foot equivalent units (TEUs) of overseas scrap paper and plastic were unloaded at the Cat Lai Terminal, 2,000 more TEUs against the beginning of the month. (1 TEU = a 39-cubic-meter container)

Located in District 2, Cat Lai is one of the key and modern international shipping terminals in southern Vietnam.

The growing presence of plastic and paper scrap imports has been choking the port and become highly detrimental to the business of the facility, as well as shipping firms and companies in need of importation or exportation, said Nguyen Nang Toan, director of the Saigon Newport Logistics, a unit of Saigon Newport Corporation.

Around 5,234 TEUs are estimated to linger long at Cat Lai in the future, according to the company.

The Saigon Newport Corporation said the cause for the pile-up was that China, which used to be the world’s largest buyer of trash, has banned imports of scrap from the European Union, the U.S. and Japan.

The move by China has made waste products to be transferred instead to Southeast Asian countries, including Vietnam.

The Saigon Newport Corporation has as of early June tightened regulations on receiving scrap shipments via both Cat Lat and Hiep Phuoc Terminals, requiring waste containers to have necessary valid import documents and written promises of picking them up by a specific date to be allowed for unloading.

Those failing to meet these requirements will have to move the containers to another port.

This is simply a stopgap measure, Toan admitted, adding that he wished competent agencies in Ho Chi Minh City to join hands to solve the problem.