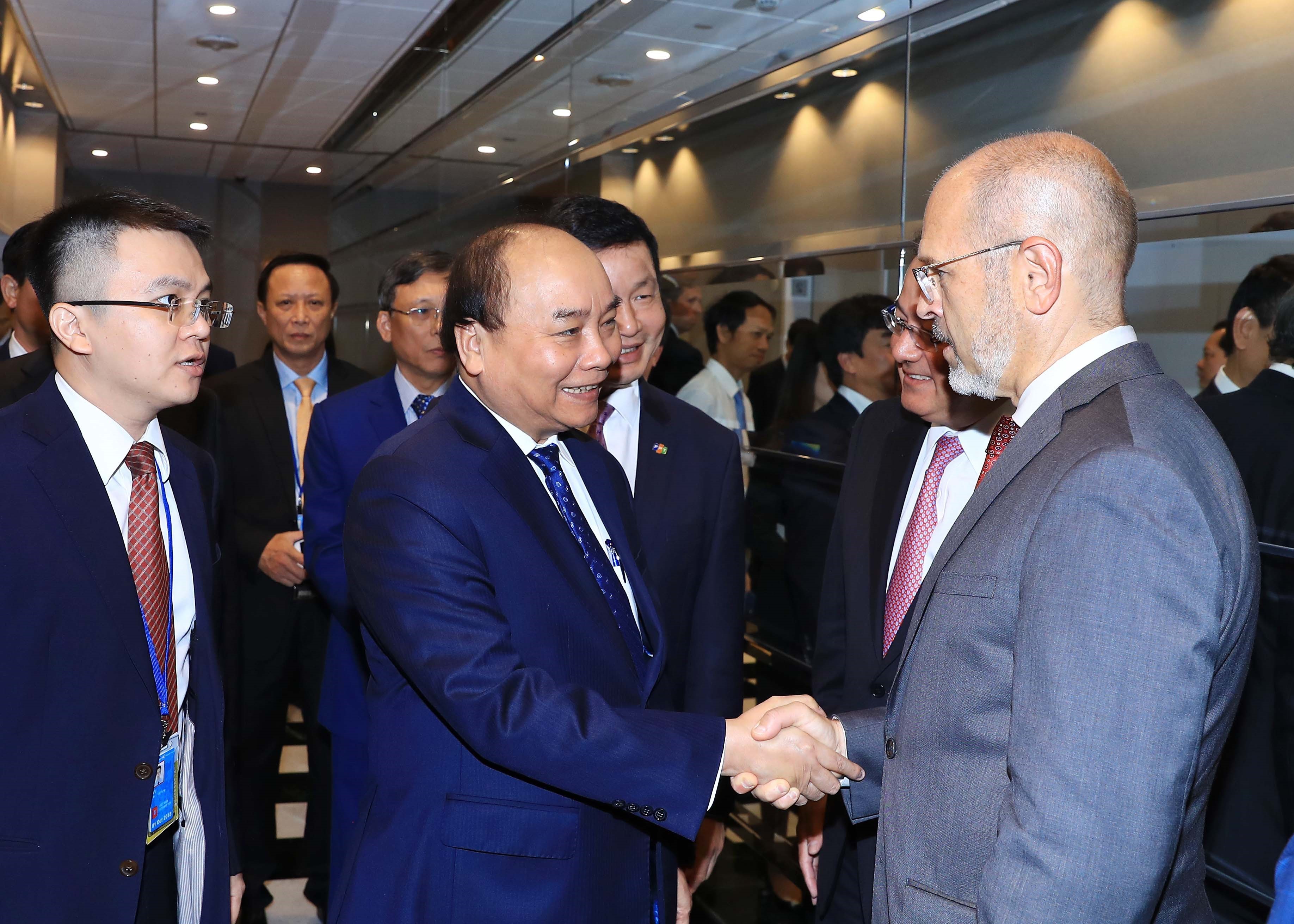 ​Vietnamese PM meets US firms to talk investment in Vietnam

Vietnamese Prime Minister Nguyen Xuan Phuc on Thursday chaired a seminar on investment attraction to Vietnam in New York City as part of his trip to attend the high-level General Debate of the 73rd Session of the United Nations General Assembly.

Addressing the seminar, PM Phuc expressed his wish to listen to U.S. businesses’ aspirations and comments on the investment environment in Vietnam and showed his readiness to answer their questions so as to help facilitate American projects and business cooperation programs in the Southeast Asian country.

Highlighting the huge potential of the Vietnamese stock market, one of the world’s fastest growing, he asked U.S. investors and enterprises to point out problems that need to be solved with more support and favorable conditions from the Vietnamese government.

He also voiced his delight that U.S. investors are eager to expand investment and business activities in Vietnam, adding that his government always welcomes foreign businesses and investors to the country to tap into local technological and labor advantages.

PM Phuc also asked them to suggest solutions to shortcomings in Vietnam’s investment and business climate, as well as ideas to help boost local development in all spheres, including agriculture, healthcare and education, in the Industry 4.0 era.

With a stable macro-economy and low inflation, Vietnam’s economy may expand by seven percent in 2018, he said, adding that there had been 24,000 foreign-invested projects worth over US$350 billion in the Southeast Asian nation.

Calling on U.S. firms to promote investment in Vietnam, the PM also asked them to recommend ways to help the country capitalize on the Fourth Industrial Revolution, particularly in dealing with risks of job losses or lagging behind.

At the seminar, U.S. investors showed their optimism about investment and business opportunities and prospects in Vietnam, with many firms having already been present in the country for decades.

In particular, they voiced their belief in the PM’s drastic efforts to improve the business and investment climate as well as boost infrastructural development and the digital economy in Vietnam.

Bernerd Da Santos, vice-president and CEO of AES Corporation, one of the world’s 200 largest energy firms in terms of revenue, said his corporation wishes to participate in Vietnam’s socio-economic development.

Introducing the company’s ten-year investment plan in the field of electricity in Vietnam with a total capital of $2 billion, the CEO said there are numerous opportunities for U.S. companies to invest in Vietnam in renewable energy, gas and liquefied petroleum gas.

He also spoke highly of Vietnam’s development achievements over the past 30 years, saying that they have been made thanks to the economic reform efforts and determination of the country.

PM Phuc and the Vietnamese government have always paid attention to stepping up the country’s innovation and application of new advancements in IT, he added.

A representative from GE Global, one of the leading global companies in aviation and mechanical engineering, expressed their wish that the Vietnamese government would direct relevant agencies to speed up the making of decisive policies toward creating more favorable conditions for investors.

Meanwhile, a representative from Medlife Insurance Group said the group wanted the Vietnamese government to continue accelerating the reform of state-owned enterprises, especially in terms of finance and banking, and give more chances for foreign investors to engage in business cooperation activities.

Some other groups expressed their interest in e-government and improvement of customs clearance for import-export.

Concluding the event, PM Phuc highlighted the Vietnam-U.S. comprehensive cooperation, firstly in economy and trade, with priority given to technology.

He affirmed that Vietnam always rolls out the red carpet for investors and will do its utmost to help them succeed in the country.