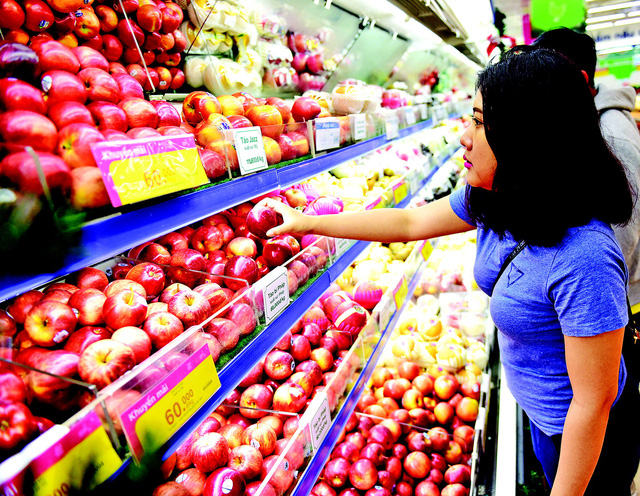 While fruit and vegetable is always among Vietnam’s top export earners, the Southeast Asian country still spends a whopping amount of money on imports of farm produce to the domestic market that is already dominated by foreign products.

Vietnam imported US$1.43 billion worth of vegetables and fruits in the first ten months of 2018, up 13.1 percent from the same period last year, according to the Ministry of Agriculture and Rural Development.

Imports of vegetables alone accounted for $377 million, a strong 36.5 percent year on year increase. This means Vietnamese consumers spent an average of $37.7 million on imported vegetables a month in the Jan-Oct period.

The huge imports of fruit and vegetable were recorded at a time when Vietnam continued to enjoy healthy growth of its exports of agriculture produce.

Vietnam is on track to meet its target of raking in $4 billion from fruit and vegetable exports this year, with ten-month revenue from these commodities estimated at $3.3 billion, up 15.5 percent from a year earlier, according to the Vietnam News Agency.

If best-selling products at wholesale markets in Ho Chi Minh City are any indication, it is safe to say that imported vegetables are dominating the Vietnamese market.

According to a leader of the Thu Duc wholesale market in the namesake district, around ten to 15 percent out of 4,500 – 5,000 metric tons of agricultural products traded daily here are imported, mainly from China.

Chinese vegetables often have many advantages over domestic products as they are more diverse in types, much cheaper and readily available in large quantities.

Aside from Chinese farm produce, many vendors at the Thu Duc wholesale market also sell vegetables from other countries including Thailand, India and the Philippines.

“I do not care whether the vegetables come from China or anywhere, I just sell what consumers need,” a vendor at the Hoa Binh market in District 5, told Thanh Nien (Young People) newspaper.

According to Hoa, Chinese agricultural products are competitive as they are cheaper than those grown in Da Lat, Vietnam’s famous hub of farm produce.

While Chinese and Thai vegetables are sold mainly in traditional markets, some of the vegetables imported from high-end markets such as South Korea and Japan have made their way to supermarkets in Vietnam, with the most prominent instances being mushrooms and seaweed.

A wide range of mushrooms of South Korean and Japanese origin, including porcini mushrooms, golden needle mushrooms and Shiitake mushrooms are dominant at most supermarkets in Ho Chi Minh City.

Except some common types such as straw mushroom and oyster mushroom, most of these imported mushrooms are not being grown in Vietnam despite high demand, according to some importers.

Just like vegetables, imported fruits also have their presence all over both traditional markets and supermarkets in Vietnam.

Vietnam’s imports of vegetables from the U.S in the first ten months of this year increased by 86 percent over the same period last year, while the respective year-on-year growths of imports from South Korea and Chile were 82 percent and 73 percent, according to Thanh Nien.

“As more and more Vietnamese people are taking overseas trips, they have the chance to taste new products in other countries and are willing to pay for these fruits when they are back home, so consumption of imported fruits have been very good,” a representative of a store selling imported fruits said.

Vietnam’s rising imports of fruits and vegetables only mean that a large amount of locally grown produce are losing their market right on home soil.

For instance, bananas imported from the Philippines are sold at many supermarkets in Vietnam, while Vietnamese bananas are kept in the plantations as they are rejected by buyers.

And while local farmers have had to reduce their crops of langsat, mangosteen, rambutan, orange, longan and many other fruits and vegetables, demand for these same products imported from other countries remain high.

Dr. Vo Mai, Vice President of Vietnam Gardening Association, told Thanh Nien that this situation is because farm production in Vietnam is still at small scale, the safety of products is not ensured, while price is high, making its agricultural products uncompetitive to imports of the same types.