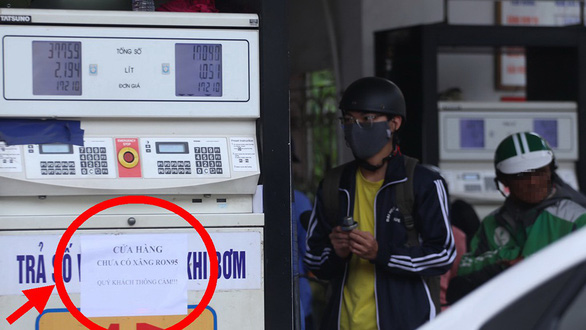 Droves of filling stations in Hanoi have temporarily ceased selling RON95 gasoline, blaming insufficient supply, despite the trade ministry insisting that there is no imbalance between supply and demand for the petrol.

At a filling station operated by military-owned Military Petrochemical JSC (MIPEC) in Hanoi, all RON95 fuel dispensers had been replaced with E5/RON92 petrol as of Tuesday.

“We’re out of RON95 gas,” a printed notice posted on one of the gas pumps reads.

“The halt in RON95 sales has caused our revenue to plummet by 40-50 percent,” an accountant for the gas station told Tuoi Tre (Youth) newspaper.

“Demand for the fuel is huge, and many customers who pulled up at our station left after learning that we no longer sell RON95 gas,” the accountant said.

Many other filling stations operated by MIPEC and other petrol companies in Hanoi also announced this week that they had stopped selling RON95 gas due to an undersupply.

Notably, MIPEC is one of Vietnam’s major wholesale petrol importers responsible for supplying other gasoline retailers in the country.

RON95 denotes an octane rating of 95 according to the Research Octane Rating (RON) system, which is determined by running the fuel in a test engine with a variable compression ratio under controlled conditions.

In Vietnam, RON95 gasoline is preferred by consumers to the biofuel E5, a mix of 95 percent RON92 petrol and five percent ethanol.

Do Thang Hai, Deputy Minister of Industry and Trade, admitted during a government meeting on Tuesday that some domestic petrol companies are struggling to access fuel supply partly due to a technical issue that has caused the Nghi Son Refinery in the north-central province of Thanh Hoa to shut down temporarily.

The ministry has requested that the Vietnam Oil and Gas Group (PVN) increase petrol imports from foreign suppliers and even accept high tax rates of over 20 percent to ensure domestic demands are met.

Dong stressed that Vietnam does not suffer from a fuel shortage.

“The incident at the Nghi Son Refinery only lasted a few days, and the supply of gas is expected to return to normal by March 28,” he said.