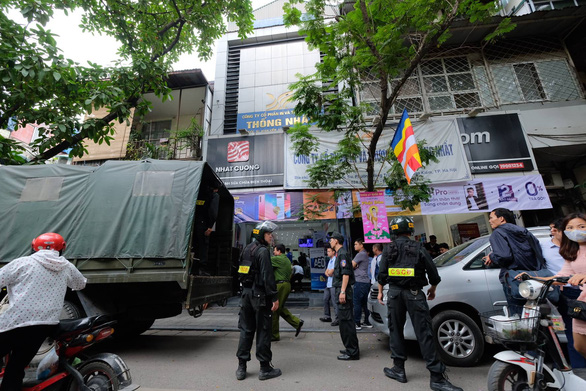 Police officers on Thursday carried out a comprehensive inspection of a major mobile phone dealer in Hanoi, forcing its outlets to suspend business altogether.

Anti-smuggling officers under the Ministry of Public Security, in coordination with the municipal Department of Police, examined multiple stores of Nhat Cuong Mobile from Thursday morning through to that night.

It was not until 10:30 pm when a motorcade carrying police officers and others who appeared to be members of the Nhat Cuong Mobile management team left the firm’s headquarters on Tran Phu Street in Ba Dinh District.

Authorities were spotted on Thursday at the Westlake Building on Hoang Hoa Tham Street, Tay Ho District, where an official of Nhat Cuong resides, but no information was given on the exact reason for the visit.

The firm was previously certified as an Apple authorized service provider.

Documents of the municipal Department of Planning and Investment show that the company specializes in electronic and telecommunications equipment and components, mobile phone manufacturing, pawn services, and flight ticket sales.

Following the inspection, the official websites and Facebook page of Nhat Cuong Mobile appeared to be taken offline.

According to Nhat Cuong Software Solutions’ website, which is still accessible, the company has provided such IT products for Hanoi as a residential database, online passport software, three-level online public service solutions, health record management, crime management software, and others.